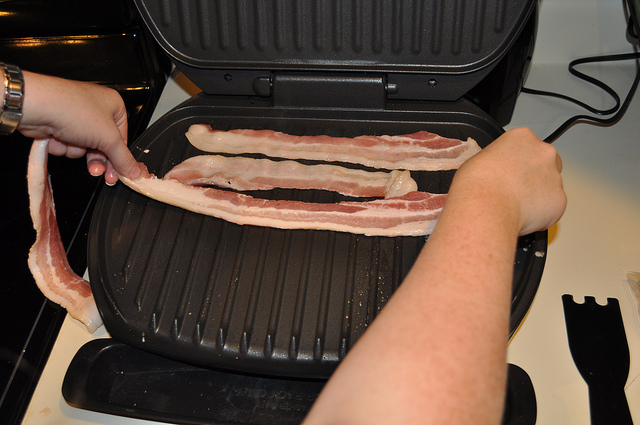 Bacon smells were related to aromatic compounds which are produced when bacon is fried in a recent study reported by the American Chemical Society in collaboration with the Compound Interest blog. They described the chemistry of these compounds which are produced with frying bacon. These odors which waft into the air are proteins in the meat that became glycated, which means sugars were attached to the proteins. This chemical process of glycation is officially called the Maillard reaction, which is named after the chemist that described this reaction in the early 1900s. When the Maillard reaction occurs, the food turns brown. The report suggested that nitrogen-related compounds in the frying bacon produce the important aromas that most people say are good.

A review of how the sense of smell works may be useful when considering aromatic compounds. The stimuli for smells are molecules that break off from objects in our environment. These molecules then become airborne. The air is sniffed into the nasal cavity and at the top of the nasal cavity is the olfactory bulb. The olfactory (smell) receptors have little extensions that reach out from the olfactory bulb into the air where they capture the airborne molecules. Then the olfactory receptors connect to neurons that begin to transmit this information to the brain. The brain processes the information about the captured molecules and smell perceptions appear. This means that whatever is floating in the air, at least a little bit of it, is coming into the nose and attaching to cells. When smelling frying bacon, little fried bacon bits become aromatic compounds that are actually being sniffed into the nasal cavity, which are then caught in the cells of the olfactory bulb.

The study did not address the question of generational differences. It is possible that the aromas of frying bacon smelling good may not be true for all generations. Many people over 30 years old might say that the smell of frying bacon is wonderful because they have memories of their mother cooking a Sunday breakfast. To those who grew up with mom frying bacon in the morning, bacon is a comfort food. It makes them feel like it is time to start the day. In an episode of the popular television show The Office, the smell of bacon was so good to Michael Scott he even made bacon on his George Foreman grill every morning, which he kept near his bed overnight. Bacon, however, could smell good or bad depending on whether one is a vegetarian, vegan or just too young to have had a mother that spent the time cooking bacon in the morning. To complete the understanding of the hedonistic values of frying bacon, future studies on multiple generations and food consumption lifestyles will likely be forthcoming.