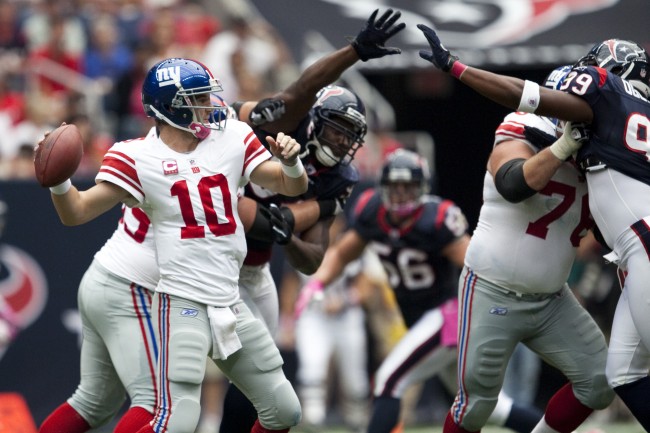 The 2014 NFL Draft is only hours away and the Blue Blitz has coverage for all things New York Giants draft related. This year is being called one of the deepest drafts in recent memory, and that extends much farther than the first round. Right now, just about every team is part of some sort of rumor to move up or down in the first round to get a specific player they want or shore up draft picks later in the draft because of how deep the draft is. For the New York Giants, after a very busy free agent season, they will look to fill up the remainder of their holes in the draft, picking who fits best.

1st Round – The Giants finished a disappointing 7-9 last year, having an all around down year. They were plagued by injuries and others did not play up to their potential. They were 28th in team offense for both points scored and yards gained. The main reason for this was Eli Manning, who had a league leading 33 turnovers (27 interceptions and six lost fumbles). It was a down year for Eli, but a lot of it had to do with the fact that he had no protection and was often running for his life on every play. Some say they had a bad year because Victor Cruz was either hurt or double, sometimes triple, teamed and Nicks was a shell of himself. Others point to the running backs, who were a plug and play week in and week out, and Brandon Myers was  bust at tight end; which he was. But the main issue for the Giants was that Eli had no time to throw the ball and was rushed out of the pocket almost as many times as the held the ball. Even if the run game was better than worst in the NFL and the receivers got open, it does not change the fact that Eli lacked the protection to make those, or any, throws.

This is why in the first round the Giants will select Zack Martin out of Notre Dame. Martin is six feet four inches tall, weighs 308 pounds and is considered one of the best offensive lineman coming out of this draft. Jerry Reese has had a philosophy during his tenure with the Giants to always pick the highest rated player on their draft board, and this year it will be Zack Martin. He played tackle in college, but will most likely move to guard for the Giants, which is no problem considering how versitile he is. He is a great pass blocker and even better in the run. The Giants O-line was a mess last year and this year no one knows how healthy Chris Snee will be or if he will be effective. Jake Matthews of Texas A&M would be another great fit for the G-men, but most have him already drafted; if he does fall to number 12, then the Giants would surely take him instead.

Other notable picks would be Eric Ebron, the very talented tight end out of UNC, Aaron Donald, who many are calling the best defensive end in the draft, and Odell Beckham Jr., a wide receiver out of LSU that many call the most pro-ready wide receiver. Although the Giants need more offensive weapons, especially at tight end, they will do no good if Eli does not have time to throw the ball to them. Donald would be great to pair with JPP, but the Giants already have depth on their D-line and are better off waiting to see if they can develop one of their pre-existing talents. It is not a flashy pick, but it is a safe pick, and after already making many questionable moves in the offseason, the G-Men need a solid pick to hold up their line, which is the foundation of their offensive house. This is why the Blue Blitz says the New York Giants will select Zack Martin of Notre Dame as the 12th overall pick in the 2014 NFL Draft.

2nd Round – After tightening up their offensive line in the first round the Giants will add a flashy pick and go with Kelvin Benjamin, the six foot five inch, 240 pound wide receiver out of Florida State. There is a lot of talk that Benjamin may fall to the 49ers at the end of the first round, but Blue Blitz thinks they will trade up and snag a receiver earlier, allowing the Giants to spend their number 43 pick on the wide receiver and create a three-heading receiving threat that they always thrive with.

3rd Round – The Giants will continue to add to their offense and select Troy Niklas, a tight end out of Notre Dame. After missing out out on Eric Ebron when they selected Zack Martin in the first round, the third round pick of Niklas will be a steal. Jerry Reese has said that he would like to wait on tight end and see if their young players (Adrien Robinson and Larry Donnell) turn into weapons, but if Niklas is on the board at number 74 then the Giants will have no choice but to pick him. He suffered an abdominal injury last season, which is why he will slide this far to the G-Men, but there is no indication that it is lagging. He will be the Giant’s steal of the draft as he is a versatile tight end with the ability to effectively block as well as split out wide and go down field, exactly the kind of addition the Giants desperately need.

4th Round – The Giants signed Rashad Jennings during free agency to add to their running back core, and hope that David Wilson is healthy for the regular season, but nothing is for sure. That is why in the fourth round the Giants will select Terrence West out of Towson University. West is a sleeper running back that has not garnered the attention he is due. He has a 4.54 40 time. He is only five foot nine inches, but weighs 225 pounds and is an explosive running back similar to Doug Martin on Tampa Bay. He can also catch the ball and is very durable, which is what the Giants need right now, durability. Though he played at a small school, his skill set should translate nicely to the NFL.

5th Round – The Giants have two fifth round picks since they were awarded a fifth round compensatory pick. With their first fifth round pick (#152) they will select Will Clarke, a defensive end out of West Virginia. He is six foot six inches tall and weighs 271 pounds. He is a smart player who relies on instincts rather than speed, and if the Giant’s coaches teach him how to not stand upright when he rushes the passer he could be a great addition and change of pace player for the Giants declining defensive line. With their second fifth round pick (#174) the Giants will select Weston Richburg, a center out of Colorado State. He is six foot three inches and weighs 298 pounds. Since the Giants re-signed J.D. Walton as their starting center he will not play much this year, but he is highly intelligent, can be moved around and moves quick for a big guy. If he fits the system and sees enough playing time he could be the Giant’s next long term center, which they have not had in quite some time.

6th Round – For the Giant’s final pick (they traded their seventh round pick to the Carolina Panthers last season for John Beason, whom they have re-signed) they will pick Cassius Marsh out of UCLA. He is a defensive lineman who can play inside and out, but at six foot five inches and only 252 pounds, he is small for a d-lineman and surprisingly not that quick off the ball. He will act as more of a change of pace d-lineman, dropping into coverage, but will be a good risk pick at #187.

There is still a lot that can happen between now and the time the draft kicks off. The Giants have a lot of work to do, and although they have filled many of their needs during free agency, there is still a lot of work to be done. That work starts tonight the Blue Blitz feels that the New York Giants will select these players in the draft and start to fix some of their glaring problems from last year.