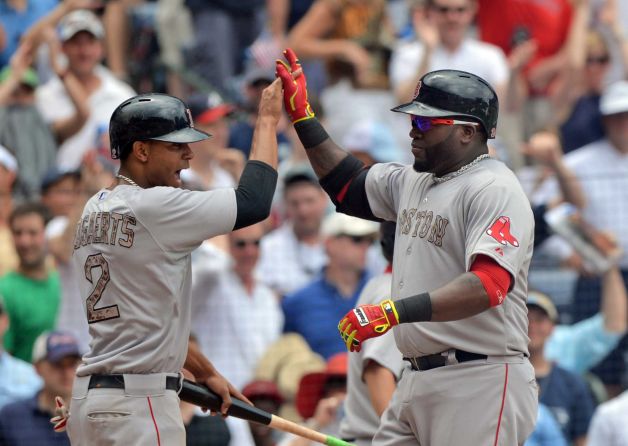 The Boston Red Sox won their first game in what seems like forever on Monday, overcoming a five-run deficit to win in Atlanta by the final score of 8-6. The Braves had a commanding 6-1 advantage before Dustin Pedroia erased the lead in a matter of seconds with a two-run single and a three-run homer in the fifth inning. Braves manager Fredi Gonzalez elected to stick with starter Ervin Santana to face Ortiz instead of bringing in a lefty, and he paid the price dearly as Ortiz’s homer tied the game just before a rain delay took place.

Boston was able to move past yet another miserable start from Clay Buchholz who walked a career high eight batters while recording just nine outs. The last thing the Red Sox needed following a ten-game losing streak was for their starter to stake them to a 6-1 deficit in the fourth inning. Luckily, David Ortiz saved the day as he has done so many times before, not only tying the game with the home run but also driving in the go-ahead run on a sacrifice fly. Ortiz did not drive in a run during the skid.

The comeback may prove to be exactly the type of victory that the Red Sox needed, especially after the tumultuous series sweep down in Tampa at the hands of the Rays. In those three games, Boston lost in 1-0 in 15 innings, then followed that up by blowing a five-run lead in game two and starting a brawl out of frustration in the third game. Pedroia clearly had enough as he could be seen slamming his hand on the bench in the dugout and screaming at no one in particular to fire up his teammates in the fourth inning. The team in general began to show a familiar fire after that.

The Red Sox know as well as anyone that this is just one victory, but it was an absolute desperate win that they needed to get the monkey off their backs. The hole has been dug and they are still in last place in the competitive American League East, but just maybe they can carry this fire over to the next game. Jon Lester caps off this short road trip on Tuesday against Aaron Harang, and Boston would be remiss not to keep the ball rolling. Despite all the losses, they have scored at least five runs in three consecutive games. It is a small victory, but all victories are small when a team loses ten in a row.

Boston’s win on Monday felt like a ten-game winning streak. It didn’t turn the season around, but the Red Sox are not going to dig themselves out of this hole without taking an approach via baby steps. The skid was a full team effort, with arguably only Xander Bogaerts and Jonny Gomes being the only ones capable of saying they played well during that stretch. The most important thing is that the streak is now over and Boston can move on to more important things, such as climbing out of the hole it has dug. It starts tomorrow with Jon Lester, one baby step at a time.