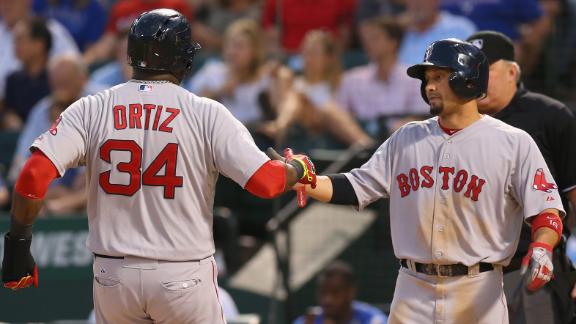 There are still issues at hand, but the Boston Red Sox continue to take baby steps towards being a great team once again after  a somewhat prolonged World Series hangover to begin their 2014 MLB campaign. Boston has finally eclipsed the .500 plateau at 19-18 after defeating the Texas Rangers Sunday afternoon 5-2 to take a three-game set in Arlington. The Red Sox endured a stretch of losing six consecutive games with a chance to reach .500, and are finally back over that hump for the first time since they began the season 2-1.

The Red Sox have won six of eight games behind a total collaborative effort. The offense has continued to come around as Dustin Pedroia and Shane Victorino are providing the team with the spark at the top of the lineup that was sorely missed early on. The rotation has rounded into form with the improved performances of Clay Buchholz and Felix Doubront and the continued dominance of Jon Lester and John Lackey.

Boston took its third consecutive series over a strong opponent on Sunday after ending its home-stand winning two of three against the Oakland A’s and sweeping a two-game set against the Cincinnati Reds. The Red Sox continued to show resiliency after finding themselves one out away from being no-hit by Yu Darvish in the opening game in Texas. Boston responded by breaking out the lumber and winning the next two easily as they get ready to head north for a series against the Twins.

The Red Sox have done a great job weathering the storm and are in the midst of their first prolonged stretch of success this season. They still have somehow yet to put together a three-game winning streak, but they have the look of a team that is just about ready to make a big move up the standings. Boston’s next two games against Minnesota feature two Twins starters sporting an ERA well north of 5.00 with Ricky Nolasco and Kevin Correia. The team-wide offensive slump has slowed drastically, as the only player on offense arguably not pulling his own weight at the moment is Xander Bogaerts.

The increased production out of Pedroia and Victorino at the top of the lineup has transformed this team back into a bunch that has slowly begun to resemble last year’s championship team. Pedroia’s power and patience have come around the past couple of weeks and he continues to lead the American League with 14 doubles. Getting production out of the top of the order has a trickle-down effect on the rest of the team, as it gives the power hitters like David Ortiz and Mike Napoli more opportunities hitting behind them. A.J. Pierzynski and Jonny Gomes have been producing as well, and Boston has also had some inconsistent yet solid production out of the bottom two slots from Will Middlebrooks and Jackie Bradley Jr.

Boston’s turnaround has been a total team effort. The Red Sox are not out of the woods yet, but finally getting back over .500 was a huge step towards that. They did a good enough job taking their early punches and not letting it affect them enough to snowball into an insurmountable deficit in the division. The Red Sox endured their injuries and horrid overall play, specifically in the categories of the back end of the starting rotation, and hitting with runners in scoring position. Through all the lumps, Boston is still just two games out of first place. All is well in Beantown at the moment.