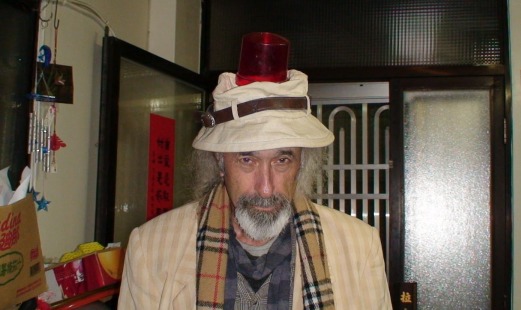 Climate Change is one of the burning global issues of the 21st century. Art and literature have brought crucial global concerns to the forefront in the past, and have the power to impact the present and the future. All the global primate species desperately need these platforms to counter climate change and significant among them is the genre of the Cli fi. Cli fi has become an enticing theme and a fine underlying force in recent novels and films such as Ian Mcewan’s Solar. American green revolutionist Dan Bloom coined the term Cli fi. Here is his story on the term Cli fi and his perspective on the Cli fi genre and climate change:

How did the Cli fi word strike you? DB: In 2008, I was looking for a term to describe a climate-themed movie like “The Day After Tomorrow” by German director Roland Emmerich, and for a future movie scenario I was working on. I wrote a press release on my blog asking if there were any producers in Hollywood who might want to green light a “cli fi” movie script I was trying to write. I never finished it, and no producers came forward but once I wrote the term down on paper — and in pixels on my blog — it grew and grew inside my head and by 2011 and 2012 I was using it again for newspaper articles. I wrote about a “cli fi thriller” titled “Polar City Red,” a very good and early cli fi novel by USA writer named Jim Laughter, his real name. So you could say that after a few years of knocking the cli fi term around in my head every day, the term cemented itself in my brain and I could not let go of it. I saw it as a useful genre term for the kinds of climate-themed novels that both Bill KcKibben and Robert Macfarlane were calling for in their 2005 essays calling for art and literature and movies that reflected our emotional struggles with understanding and acting on climate issues of our times.

As Cli Fi Coiner, what are your assessments of Cli fi genre and its contribution to Sci fi literature? DB: I don’t consider cli fi to be a part of sci fi at all. Cli fi novels and movies can take place in the past, the present or the future — near future or distant future — but they are not sci fi. It’s true that Sci fi novels can explore climate issues, and some have already and I hope to see more sci fi novels do this, but for the most part sci fi is about clocks that strike 13 and space trips to Mars and Jupiter. Cli fi is a very different genre, and at this time in human history, it is much more important and meaningful. I grew up with sci fi, I love sci fi. But it’s time for cli fi to shine. Even Isaac Asimov, the great sci fi writer, would be writing cli fi short stories and novels, if he were alive now. As far back as the 1980s, he was already speaking out about the perils of unchecked global warming. So I see cli fi as a “reframing” of the many climate discussions going on around the world, in many countries, rich and poor.

How much of an impact do you think the Cli-Fi novels and films managed so far in the world of climate change? DB: So far the impact of cli fi novels and films has been minor, very minor. The genre term is so new, most people have not even heard of it yet, and most writers and literary critics still don’t use the term yet. This “reframing” is so new; it has not yet had time to make an impact. But the stage is set, and within the next few years, cli fi is going to have a huge impact on the kinds of novels and movies being made worldwide. Already, Indian director Shekhar Kapur has lined up a cast and crew to make his new movie titled “Paani” which means “water” in Hindi, and John Travolta is attached to play a major role in this cli fi film about ”water wars” for fresh drinking water among the haves and the have-notes in an imagined New Delhi in the near future. Director Kapur is well aware of the cli fi term now, and plans to use it in his marketing plans for the movie.

After initially skepticism about climate change in the scientific sphere, it has now largely become a battle between Science and Religion. What is your take on this debate? DB: The debate over climate change and global warming is settled. It is real and it is happening, and it threatens the very existence of the human species in the distant future, maybe just thirty generations from now. Most scientists get it, and more and more religious conservatives are coming to realize that they need to get with the program now, too. I’m optimistic. I see everyone coming together worldwide to work on these major problems facing humankind. I’m totally optimistic. Cli fi gives up a genre term to frame our fears — and our hopes.

Climate Change and other environmental issues have always been low on the agenda among world powers including the United States. It is clear by now that an odd climate change conference that is meekly attended is not the answer to this growing monster. As an American and green revolutionist, what are your expectations from America and other countries in relation to climate change? DB: As an American and a deep-green climate activist, aged 65, I believe that cli fi novels and movies can serve to wake up readers and viewers to the reality of the Climapocalypse that awaits humankind if we do nothing to stop it. So I hope that leaders in many countries, and especially in the USA, such as President Obama and whoever takes his place in 2016, will be moved by the cli fi genre to take strong decisive actions to reset the buttons that threaten to do us all in. Just as Nevil Shute’s 1957 novel “On the Beach” — and the movie two years later — helped wake up world leaders to the dangers of nuclear war and nuclear winter, so too will a new cli fi novel with the power of an “On the Beach” cri de coeur wake up our world leaders, including Obama and his successor, who are still sleepwalking mere to the next election cycle and not thinking about the future of humankind at all. I see cli fi as a “wake up call” for world leaders, not as a marketing buzzword to sell books or movies. Cli fi is not about entertainment or the next bestseller. It’s an alarm bell.