Derek Carr Selected By the Oakland Raiders in Second Round 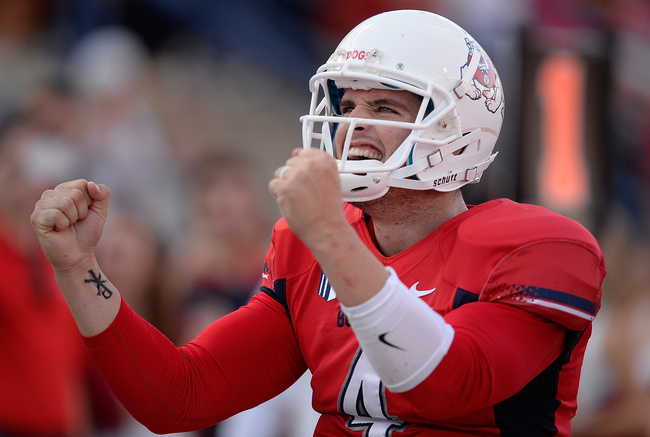 Derek Carr was selected in the second round by the Oakland Raiders on Friday, during the second day of the NFL Draft. The quarterback from Fresno State was chosen with the No. 36 overall pick in the draft, and could likely be the quarterback of the future for the Raiders. When the press asked him about being the starting quarterback for the Raiders, he responded that it was up to the coaches in Oakland to decide. He further added that he will do his best to help the team and gain the confidence of the coaching staff the they made the right decision.

The Raiders had major problems with the quarterback position last season. Matt Flynn was acquired from the Seattle Seahawks last year to be the starter, but was outplayed by backup and third-year quarterback Terrelle Pryor during pre-season. Flynn lost his starting role to Pryor, but Pryor issues with passing the ball consistently well doomed the team. Last season, the Raiders had three starting quarterback, and all three failed to be consistent.

With Derek Carr, the Raiders might have a chance solving this quarterback problem along with Matt Schaub. Schaub is the starter, but, with the Oakland Raiders, anything can happen before the season starts. The Fresno State quarterback already stated, after being selected, that he was going to work hard and be part of the team. That is all that could be said to make any Raiders fan feel good.

Another impressive stat about Carr is that he is one of 19 quarterbacks in FBS history to throw for more than 10,000 yards. He has the second highest FBS ratio for having 113 touchdowns with 24 interceptions. Many analysts consider him as having the strongest arm in the 2014 draft, and it was a surprise not to see him get drafted before the likes of Johnny Manziel and others.

As for the Oakland Raiders, this will be the fourth time the Silver and Black have selected a quarterback in the top two rounds since 1981. JaMarcus Russell was selected in the first round back in 2007. Russell turned out to be a big flop for the Raiders as the rookie quarterback, and, at the time, did not amount to anything.

Derek Carr is expected to be the man to take over the helm eventually. Matt Schaub might be the starter, but his contract was only signed for two years. So, if Schaub does not work out, the Fresno State quarterback could come in and take over as the man. Whether the rookie is going to do it this year is another question entirely. In the end, the pick was a good one for the Oakland Raiders, especially if a guy like Carr is still available during the second round.