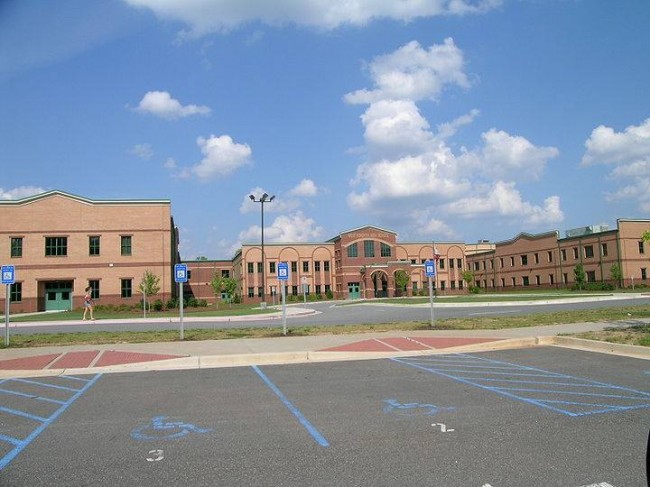 Georgia high school seniors who attend a school on the outskirts of Atlanta found themselves in hot water on Wednesday after it was discovered they had allegedly hung up a racist banner on their school’s roof as a prank which read, “—– We Made It.” The sign at South Forsyth High School was reportedly supposed to have been meant to rejoice in the seniors’ upcoming graduation ceremony, but instead it appeared as extremely offensive to many individuals.

High school Principal Jeff Cheney explained in a message that was sent to all senior in reference to the rapper Drake that without the school administration’s knowledge, senior students put up an offensive banner that contained a verse from one of the songs from Drake on the roof of the school as a prank.

Cheney stated that it was removed as soon as the school officials found out about it being up there. He wanted to send out apologizes for the seniors behavior. He said such actions were unacceptable, and he added that the offending students would receive the suitable punishment for their deeds.

One of the parents of a high school senior at South Forsyth High School, which is located in the suburb of Cumming, Georgia, exclaimed that she did not hear about the sign until she received the principal’s e-mail message. She declared that the high school has an extremely assorted population, so she found herself very shocked and saddened to hear that some of the seniors decided to put up such a banner, that they believed such a sign would be okay. She added that it was impossible to know what the intentions were behind the actions of the students that put up the banner, but she believes fully that they knew it would create controversy with the public.

The student’s mother said that she hoped the actions on Wednesday have brought up many dinner conversations about how senior pranks need to fun, clever and carefree, not destructive, cruel, mean or nasty. Apparently the sign incident had not been the first prank high school seniors had pulled at the school. Supposedly students also turned one of the school hallways into a soaking wet slip and slide and stuck a for-sale sign on Principal Cheney’s car. As for these, the principal stated that he felt some pulled pranks were okay, but others were simply unacceptable.

He added that there were numerous things he could live with, but the sign was what offended him and the entire high school. He stated that he realized the sign was created from a popular song lyric, but that did not mean that the entire world and society in general was going to like it or appreciated seeing something like that.

So with that, South Forsyth High School seniors have found themselves in hot water after it was discovered they had allegedly hung up a banner on their school’s roof which read, “—– We Made It.”