Lance Stephenson Antics Likely Will Result in Change of Teams

By Simon Mounsey on May 29, 2014Comments Off on Lance Stephenson Antics Likely Will Result in Change of Teams 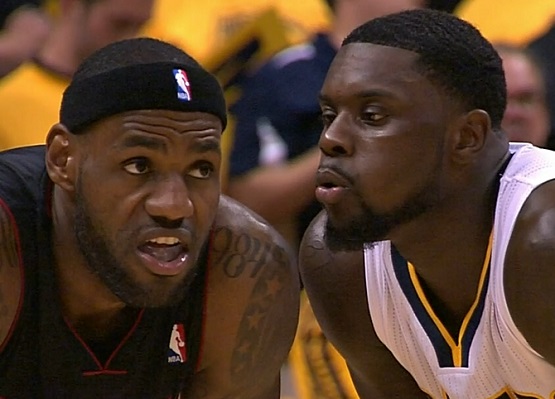 The Indiana Pacers have had one roller coaster of a season, particularly in the playoffs. One of the reasons, seemingly, is the lack of cohesion and chemistry in the Pacers locker room. Lance Stephenson, despite being of the more consistent players on the team, is likely one of the causes of dissension on the team due to his antics, and if Indiana does not miraculously make it to the finals, the shooting guard will probably change teams during the off-season during his free agency.

Stephenson is arguably one of the most vital players on the Pacers team, and as such, the shooting guard has had an interesting history. In his rookie season he was picked up by Indiana without being drafted, while seeing little playing time until the 2012-2013 season. Ultimately, he broke through as one of the Pacers’ best players this regular season when he averaged 13.8 ppg, 4.6 apg and 7.2 rpg with almost 50 percent shooting. While Paul George may be the franchise player on the Pacers, Stephenson this season has proved to be the most versatile. This was cemented April 13 when he had a franchise record five triple-doubles this season.

Stephenson can shoot, rebound, create shots for teammates and is a tenacious defender. At the same time though, he has shown his immaturity. Despite his stellar play this season, he has likely added to Indiana’s chemistry problem. Earlier in the season, he boasted how much he was getting paid by uploading a photo of him with $1 million bills. Beyond that, he reportedly was moments away from getting into a fist fight with Evan Turner the eve before their first round series against the Hawks. Earlier in the week, he attempted to get into the head of Lebron James by saying the 4-time MVP showed weakness by talking trash to him.

Fast forward to Game Five, and the world saw in one game the immaturity of Stephenson. At one point in the matchup he blew in the ear of James, a bizarre move. It did not end there. Towards the end of the game, the eccentric player decided it was within his best interest to go to the Heat bench and listen to what play they had come up with. Additionally, Stephenson would flop for the second time in the series, which garnered him a fine of $10,000.

This is the playoffs. This is where players compete for a gold trophy. This is not a time where players get respect for underhanded tactics. However, after game five, both Larry Bird and coach Frank Vogel stated that Stephenson probably went over the line. If the head honchos of the Pacers are having issue with the way in which Stephenson is trying to get into the head of the Heat, most likely his teammates are as well.

It has been noted that there has been much locker room turmoil for the Pacers this season, particularly starting at their mid-season collapse to their inconsistency in the playoffs. One has to assume especially after the Turner incident that it is Stephenson who is one of the key problem. As such, he could be disrupting a team that on paper should be in the NBA Finals. With that said, his antics, despite his stellar play, may be getting in the way of the Pacers winning their first NBA championship.

Considering the disruption and bad cloud he may have planted in the locker room, it is more than likely if the Pacers do not at least make it to at least the Finals, Stephenson will be finished with the Indiana Pacers. He is a restricted free agent, which means Indiana can match any offer for him, but after Bird’s comments, he may not want to match any offers. In fact, he may not even want to speak to the swingman if they lose. The Boston Celtics legend may instead decide to make the quirky player someone else’s problem.

At the end of the day, there is no doubt that Lance Stephenson is one of the most talented players on the Pacers. However, unless Lance Stephenson’s antics disappear, he will likely change teams as a result of Bird or Vogel not having the patience for him. Where that will he go instead? That is anyone’s guess, but he certainly is not doing himself any favors for a potentially lucrative new contract this off-season.