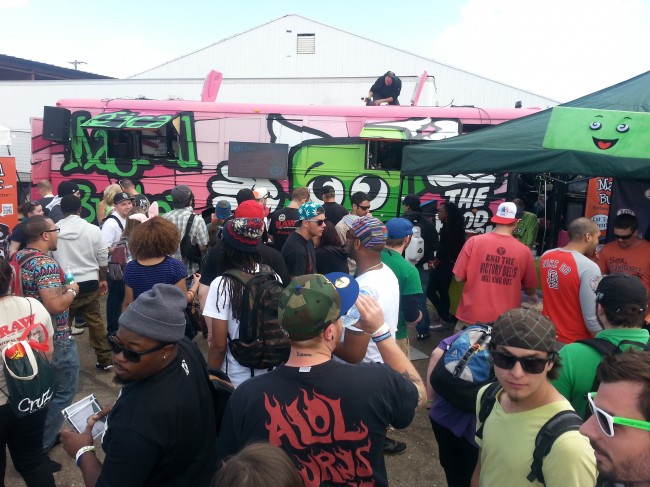 Since recreational cannabis/marijuana use was legalized in Colorado and Washington in 2013, the related businesses have had their ups and downs. The newest development in the world of cannabusiness is a pink and green food truck created and run by MagicalButter.com, which has newly come to Colorado to sell edible products made with marijuana butter, as well as related merchandise. The truck has become known as the SAMICH truck; SAMICH being the acronym for, Savory Accessible Marijuana Infused Culinary Happiness.

Adventurous foodies know that hidden gems can often be found in the guise of an unassuming food cart or truck. Portland, Oregon – the Rose City, is famous for its annual food cart festival and its wide and varied selection of the humble, little restaurants. Now, the Mile-High City has a step-up on Bridgetown. The SAMICH truck made its debut in Denver during the April 19 and 20 Cannabis Cup and drew crowds curious for a taste of the trippy treats. The SAMICH truck began as a 40 ft Freightliner C2 schoolbus that was then gutted, modified, and fitted with appliances to transform it into a four-star quality cannabis connoisseur’s culinary reverie.

Magical Butter began as a distributor of their flagship product, the MB2 machine, a “botanical extractor.” MB2 is a kitchen counter-sized device which can be used to create tinctures and lotions in addition to oils and butters of an edible, cosmetic, and medicinal nature. The machine is essentially a minature crock-pot with a blender for botanicals. MB2 units are being sold at the Magical Butter SAMICH truck as well as at the company’s website, MagicalButter.com. Patrons of the food truck who purchase something to munch on can get their MB2 at a discount from the typical market price, which is $175.

According to The Cannabist, some of the marijuana-infused items that curious diners might come to find on the Colorado food truck’s menu are the Bronco sandwich (BBQ pulled-pork), the Samich (sunbutter and jelly), the Banh Mi sandwich (Vietnamese-style pork), and the PhaReal Cheese Samich with Kushie Tomato Soup. Each of the food items sold from the Magical Butter SAMICH truck is infused with cannabis, and each item on the menu has a varying degree of potency.

Garyn Angel, the Founder and CEO of Seattle-based MagicalButter.com has said that, “We are trying to create the most unique and delicious culinary experience in the world!” The CEO commented that future plans for the company include the release of a smartphone app that will allow consumers to monitor the truck’s location and when it will be on its way in their direction. Additionally, Angel said that plans for a permanent outdoor location in Seattle are on the horizon, as well as a number of additional food trucks.

The stigma that once surrounded cannabis is beginning to dissipate like its own pungent smoke as more states decriminalize the use and possession of this infamous plant. Since the cannabusinesses in Colorado and Washington have expanded with the advent of new and creative enterprises, such as this marijuana food truck, the sensation surrounding the plant has only grown. A gradually changing paradigm looms on the horizon, and consumers may just be looking at the very beginnings of fledgling cannabusinesses like Magical Butter.

Sources:
Magical Butter
The News Tribune
The Cannabist
The 420 Times