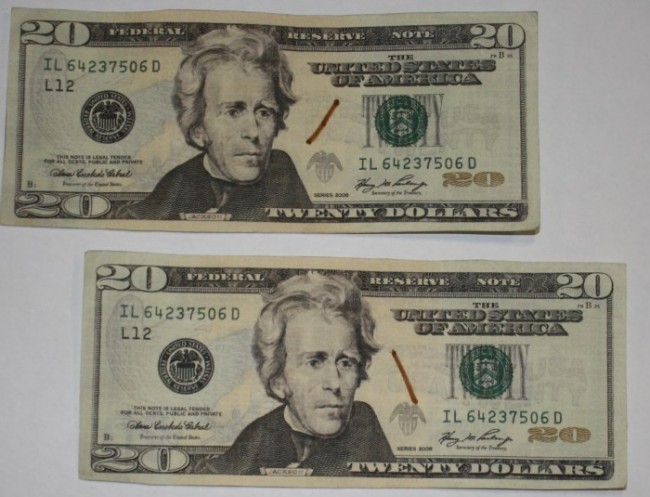 Five high-schoolers from New Jersey have been charged in connection with printing and passing counterfeit money they made at home. A substantial portion of the fake cash was spent by the teens on school lunches in the cafeteria, snacks at the Main Street 7-Eleven and doughnuts, according to police on Friday.

The students all hail from the upper class suburb of New Milford, New Jersey, which is located approximately 20 miles northwest of New York City. Using an ink jet printer and heavy resume paper, police say that one of the students printed around $1,000 in denominations of $5 and $20 bills and passed them out to friends, who then went on a spending spree for approximately one month beginning in April before employees at the local Dunkin’ Donuts called police to report that they had received counterfeit money. The establishment became suspicious when they took in seven fake bills and all of them were printed with the same serial number.

Upon beginning their investigation, New Jersey police viewed the security camera footage and were able to determine which students had passed the bills. The fact that the students were all dressed in clothing that named their Bergen County high school made the identification process a little easier.

Although the small-time operation and low-tech method of creating the bills seems laughable, when used in low light at stores or bars, the fake bills are “good enough” to trick cashiers, says former Secret Service agent Joe LaSorsa. Because amateur counterfeiters also stay close to their home and frequent the same circle of stores, the operation is usually exposed quickly. Said LaSorsa, ““They do it just enough to get in trouble. I don’t think anybody is getting rich doing this.”

Experts knew all along that the fake bills in New Jersey were being produced by amateur forgers. LaSorsa states that more sophisticated counterfeiters generally print more money than they are willing to spend and opt to sell the fake money for the real thing at almost half of the face value of the bills.

All five students have been charged in juvenile court. Two face charges of possession of forgery equipment, passing forged bills and theft by deception. The remaining three face only theft by deception charges for the counterfeiting scheme. Because all five are minors, they will likely not be sentenced to prison. New Milford Police Chief Frank Papapietro believes that the students were naive and had no real concept that the crime they were committing was “a crime against the United States government.” Chief Papapietro said that the students received “a real wake-up call” when they discovered that the investigation into their counterfeiting operation was being aided by Secret Service agents.

Because at least one counterfeit bill was passed in the school cafeteria, the superintendent of the New Milford schools warns that the students could also be subject to “some pretty severe suspensions” once the school’s internal investigation is complete, as well as the loss of some privileges.

Student reaction in the high school was mixed, with at least one student disparaging the scheme as “dumb” while another advised the counterfeiters to “get a job.” Also at the heart of the issue is that the teens come from upper class families with nice homes and well-kept yards and surely were not in need of money so much that they had to break federal law to obtain it.