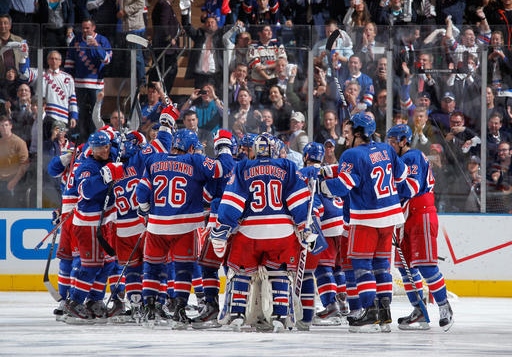 With a win at home tonight, the New York Rangers will be one win away from their first Stanley Cup Finals appearance in 20 years. If the Rangers can keep on rolling against the Montreal Canadiens and win the series early, two things could happen that fans would never have imagined before: they will finally be able to rest after having endured a horrid schedule through the first two rounds; And the Rangers could go into the Finals as potential Stanley Cup favorites.

At the beginning of the playoffs- and even through the first two rounds for that matter- nobody outside of New York actually gave the Rangers legitimate consideration in ever becoming a favorite to win the Stanley Cup. However, through two games against the Montreal Canadiens, the Rangers appear to be finding their stride at the perfect moment and look to have all of the momentum on their side moving forward. There are several reasons why the New York Rangers should be considered favorites to win the Cup now and it all starts with the ‘King’ of New York.

Henrik Lundqvist:
Luck or not, the man in net for the Rangers is called ‘King’ for a reason. As of now, he leads all playoff goalies that qualify (7 GP or more) with 10 wins, a 1.93 Goals-Against-Average (GAA) and a .939 save percentage. Lundqvist has gradually gotten better in every single series so far in these playoffs and is playing like a true Vezina winner. Through the Eastern Conference Quarterfinals versus the Philadelphia Flyers, the Rangers had to win in seven games and Lundqvist finished the series with a .919 save percentage. In seven games against the Pittsburgh Penguins in the Conference Semifinals, Lundqvist finished with a .940 save percentage. It is hard to imagine topping that statistic, but through the first two games against the Canadiens, he has a .952 save percentage. What is even scarier for whoever will have to face the Rangers should they make it to the Stanley Cup Finals, during the Rangers current five-game winning streak (four of them being on the road), the ‘King’ has an astonishing .959 save percentage and a 1.20 GAA.

Hitting Their Strides:
The Rangers net-minder is not the only one who happens to be finding his groove right now. New York has also seen some players showing up to the dance fashionably late. Recently, fans in New York have been booing LW Rick Nash whenever he would touch the puck. However, coming back home in Game Three, the Blueshirt-faithful will surely be singing a different tune. Rick Nash, who had been held scoreless in the playoffs for the Rangers in the first two rounds, scored in both Games One and Two and as any New York fan will tell you, if Rick Nash can deliver consistently like he is supposed to, the Rangers can turn into a dominant offensive team. Another trade acquisition who happens to be finding the net at the right time is RW Marty St. Louis.

St. Louis has five points during this five game winning streak, but it is his total numbers in Ranger wins and losses this postseason that is truly remarkable. In the 10 New York Rangers wins, Marty has 10 points (4 G, 6 A). In the six losses, he has just a single point. St. Louis has been a catalyst for the Rangers success for a few reasons: his offensive skill-set can make him a game-changer at any moment he steps foot on the ice; he can also provide a shot in the arm to a struggling power play unit or penalty-kill unit (as seen in Game Two); and sadly, the play from St. Louis after the death of his mother has turned into a bit of a rallying cry for New York.

Finally, there cannot be a mention of players who happen to be catching fire at the right time without mentioning Defenseman Ryan McDonagh. Before the start of this series, fans were left wondering where-oh-where could Ryan McDonagh be? Well, after notching six points through the first two games of this series, racking up eight total points in the last five games, McDonagh’s coming out party had finally arrived.

The combination of Nash, St. Louis and McDonagh has a total of 12 points through the first two games of this series. If the production from these three players can remain steady, paired with the already solid production from Zuccarello, Derek Stepan and Brad Richards, the Rangers offense, under the new style of Coach Alain Vigneault, could have finally arrived at the most perfect moment. Fortunately for the Rangers, even if the production slows down and the New York offense hits a bump in the road, they will still have the hottest goaltender in all of the playoffs right now playing in net for them.

No matter who prevails out of the Western Conference between the Chicago Blackhawks and Los Angeles Kings, they will have to face a team that has truly found their strides at the perfect time. The road traveled this season has been a long and winding one for the Rangers fans, coaches and players alike. But if the end result is Henrik Lundqvist hoisting Lord Stanley above his head, then was it all worth it?