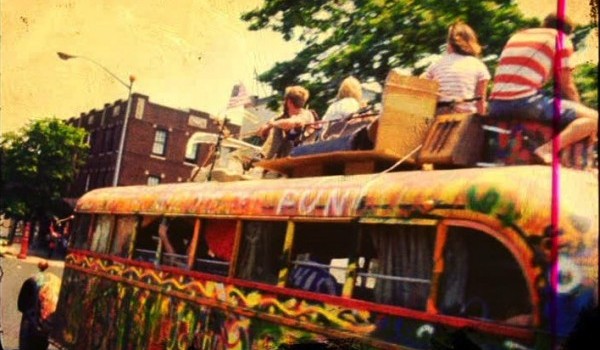 On June 17, 1964, Ken Kesey and his Merry Band of Pranksters embarked on an LSD-soaked journey that would mark the beginning of the Psychedelic Era. In a colorfully-painted and converted 1939 International schoolbus, with a destination of Furthur (a misspelling that was later corrected) the group traveled across the country, making friends and melting faces everywhere they went. Kesey’s son, Zane Kesey, who was just three-years-old at that time, is celebrating the 50th anniversary of that infamous bus trip by recreating it…sort of. The route is different, they are not leaving until the end of July and LSD will be in short supply (as in none), but the spirit of the Pranksters will be present.

Through the popular crowd-funding website, Kickstarter, Kesey is making spots on individual legs of the journey available for $200 each. The route this time will be more northerly, in order to take advantage of certain music and art festivals this summer. No official stops have yet been announced.

Ken Kesey, author of , One Flew Over the Cuckoo’s Nest, was a guinea pig during tests that the government conducted using mind-altering drugs, like LSD. Kesey began throwing parties at his house in the hills around Stanford University, in order to share with his friends the experiences brought on by the drug. He called these parties, the Acid Tests. Playing music at the Acid Tests was a bar band from the area who called themselves The Warlocks. That band later became the Grateful Dead.

According to Kesey’s friend, Ken Babbs, following a road trip he took to New York with his wife and parents, Kesey decided that an additional trip with his friends would be amusing. They would take lots of LSD, film the happenings and turn it into a movie. When he realized that a station wagon would be too small, he spent $1,500 on an old bus a friend of his found in San Francisco. The vehicle had already been converted, complete with sleeping bunks and even a working kitchen.

The adventure included encounters with a police officer in California, a river in Arizona and a piano player in New Orleans. One of the Pranksters had to be left behind in Texas due to a “bad trip.” In New York City, they met beat poet, Allen Ginsberg. He took the whole crew to an estate in Connecticut, where he introduced them to the guru of LSD, Timothy Leary.

Due to technical difficulties, the audio and film tapes recorded at different speeds, the movie was not able to be finished until decades later. Magic Trip was not released until 2011, ten years after Kesey’s death.

In 1968, Tom Wolfe’s The Electric Kool-Aid Acid Test, was inspired by Kesey and his Furthur trip. The book helped galvanize the journey as the start of the psychedelic era. According to Terry Anderson, who wrote The Sixties, in 1964, the traveling acid test was upstaged by other major events. The Beatles, Civil Rights Act and the ongoing grief over the assassination of JFK all put Kesey’s experiment out of the spotlight. Four years later, the popularity of Wolfe’s book helped to correct that.

Babbs contends that Kesey had not considered himself to be the originator of the Psychedelic Era and was more than happy to simply ride on that wave. Too young to be beatniks and too old to be hippies, Kesey and his Merry Band of Pranksters were in a class by themselves.

The group joining Zane Kesey could perhaps be categorized this way as well. In all likelihood, Kesey will be traveling with representatives for hipsters, millennials, gen X’ers and nouveau hippies. Who knows ,there may even be some original hippies going on this trip.

Not only do prospective travelers need to pony up $200, they must pass some tests. Whether or not they like films about gladiators will be a deciding factor. Also, they cannot be camera-shy, as Kesey is planning on, like his father, filming this road trip. The recreation of Kesey’s Furthur trip, now 50 years old, will not only be a celebration but a reconfirmation of just how much fun a group of people can have on a bus.