Teaneck, N.J. Students Break Into School and Vandalize It as a “Prank” 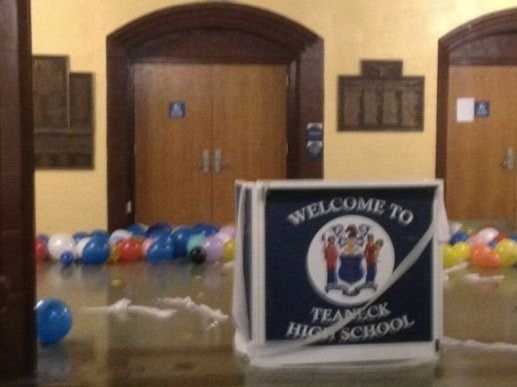 Police in Teaneck, N.J., have arrested sixty-two students for allegedly breaking into a high school and vandalizing it early Thursday morning. Those who entered the school Thursday found balloons, hot dogs, petroleum jelly, toilet paper and yes, urine, strewn and spattered in the hallways of the building, all of which was intended by the students to be a simple prank.

According to the acting police chief of Teaneck, Robert Carney, the mayhem occurred as part of a year-end prank by seniors of the high school, who plan an annual prank before graduating. Upon breaking into the building at approximately 2 a.m., they set off a burglar alarm, which caused police from over 12 nearby towns as well as county officers to arrive on scene, many of whom could see what is described as “numerous”students inside of the building before they began making arrests.

As expected, there was no shortage of students hiding and running from police, but police, who used police dogs to search for students, are saying that they are fairly confident that a good portion of the vandals were caught. One student stated that no less than 100 of her classmates were involved and that the prank had been planned for a month. She admitted to having been inside of the school for approximately one hour before police arrived on the scene.

The 18-year-old students were handcuffed by police and taken from the police station via van to the court building, where they were released from their handcuffs before making an appearance before Judge James E. Young, Jr., who advised them that they would be released pending an indictment on the criminal mischief and burglary charges or to face less serious charges in municipal court.

John Garland, police sergeant in Teaneck, New Jersey, told reporters that “You could see that look, kind of a combination of fear and shock,” in the faces of the arrested students. “You could hear that remorse and regret was definitely setting in.” Carney agreed that many of the students were frightened, but other students were laughing.

Among the alleged damage caused by the students included writing on walls, taping hot dogs to lockers, scattering balloons, silly string, and toilet paper throughout a hallway, and relocating classroom furniture into hallways. Because of the urine that was also left behind, the Teaneck Public Schools district was forced to hire cleaning crews before the students could enter the school, which houses approximately 1,300 students, for classes. School Superintendent Barbara Pinsak confirmed that students were able to enter the building on time on Thursday morning.

Twenty-four of the students arrested are over 18 years of age and have been arraigned in adult court for criminal mischief and burglary. A Bergen County prosecutor’s office spokeswoman stated to The L.A. Times that the office was reviewing the offenses in order to determine if they were to be changed to less serious charges or if the existing ones would remain. The other students, all underage, were released to their parents’ custody. The Teaneck, New Jersey school district has not commented on what, if any, punishment will be meted out to the students involved.

Many parents of the students, who would not identify themselves, were outraged at the charges their children faced, while others complained about the media that had gathered. One woman was angry that the students were being recorded without their permission, although all inside the court were at least 18. Another mother insisted that the students “are all good kids” while a man added that his “kid’s going to an Ivy League school.” Said Carney, “To go into a school and damage a school, that’s not a prank. That’s criminal mischief.”