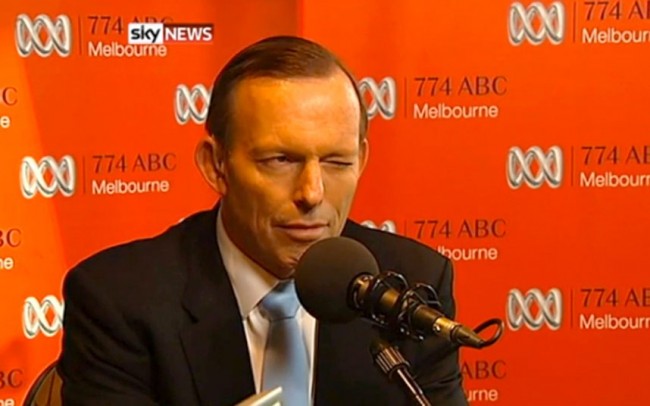 Australian politics have been more than fairly interesting as of late, due in part to seemingly true allegations that Prime Minister Tony Abbott has simply lied to everyone. But recently Mr. Abbott has brought the attention of the world to Australia with an incident now known as “Winkgate.” During a radio appearance, the prime minister took a call from a woman identified as Gloria, a senior living on a pension who also worked on a phone sex line in order to make ends meet every month. As the caller was speaking, the prime minister winked at his interviewer in the booth with him. That wink has been interpreted as sexist by some and downplayed by others, including the current government. While it may be just a mistake in judgement, Tony Abbott and Winkgate make headlines all over the world and no matter how it is interpreted it is not a good thing.

The Washington Post carried the headline “How Australia’s winking Tony Abbott became one of the world’s most unpopular prime ministers” and called the resulting furor “madness.” The article in the American publication also detailed some of the prime minister’s “Abbotisms,” which provide a damning picture of sexism and buffoonery on the part of one of the world’s leaders spanning over 40 years of public life. But the Washington Post is not the only news source covering the story. The media in India, Indonesia, Thailand, New Zealand, and the various countries in the United Kingdom have all run stories about Abbott’s winking gaffe, noting its creepiness and the “row” it created in Australia. It just goes to show how one ill-timed and ill-advised expression can serve to draw the attention of the world in an unwanted fashion.

Perhaps the worst part of being in the international spotlight, however, is how the press have covered Abbott’s recent political activity. The budget that his Coalition government has put in place and the broken promises that became obvious out of it have been discussed in superficial terms by a press that until this moment had not been covering the issue, but that may change the more Tony Abbott’s mistakes create stories like Winkgate.

The most damning article from the international press so far has been one from Al Jazeera, in which Tony Abbott and Winkgate make the headline “Australia’s George Bush.” For any American readers, that is not exactly the most inspiring idea, though it is titillating. The story compared Abbott to George W. Bush and the promises the former American president made during his election campaign in 2000. Americans may be familiar with the tax-cuts Bush promised to low- and middle-income earners which he then failed to provide. The comparison between that incident and Abbott’s budget, which instead of relieving the burden on such people increases it. That is not a favorable picture. The connection between Abbott, who has been labeled as Australia’s most unpopular prime minister, and ex-President Bush, largely considered one of America’s least popular presidents, is not a good one.

While that is a very unfavorable picture to have painted of oneself, the most concerning story for Tony Abbott so far is that which appeared in the Jakarta Post. Indonesia just elected a new president and Australia’s prime minister will make a visit to this newly-elected leader next month. Earlier this month, however, relations between Indonesia and Australia were damaged when Abbott canceled a visit to the country due to problems at home over the budget. The article in the Jakarta Post today does not deal with those issues, but it does point to a certain amount of dislike directed towards Abbott on the part of the Indonesian people. Their interpretation of Winkgate is not that he is sexist, but arrogant and insensitive. Neither of these traits will help Abbott with his diplomatic relations with Indonesia.

For Tony Abbott, Winkgate is not just a gaffe or a localized mistake. It has proved to have far-reaching implications. Public opinion of him at home has dropped 30 percent since the election and there have been protests recently about his draconian budget. But that is nothing compared the issue of international disdain and dislike that is being exposed at this time. Being compared to a country’s most unpopular leaders is exactly the opposite effect a foreign dignitary wants to have. In this respect, Winkgate has been an utter disaster for Tony Abbott and the fact that a few days on it still makes headlines is a bad sign for his public relations problems.