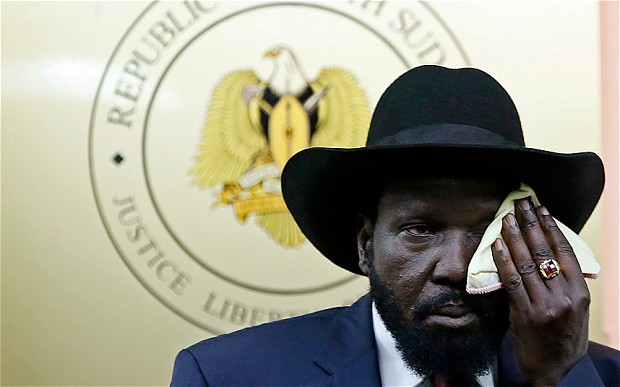 As the world’s youngest country descends into civil and ethnic war, the international community has been trying desperately to end the conflict in South Sudan. The five-month long war over loyalty to former Vice President Machar and current President Kiir has prompted U.S. Secretary of State John Kerry and U.N’s Secretary Ban Ki-Moon to visit the war-torn nation, urging both sides to adhere to a formal ceasefire.

The conflict began only 2 1/2 years after the formation of South Sudan. The independence celebration for the world’s youngest country was met with high hopes and optimism, as the world leaned on the idea that the violence would end with South Sudan’s relatively peaceful secession from the north. In attendance was Ban Ki-Moon, who spoke of the possibilities of mending broken relations between the two sides following the formal secession.

Shortly after the celebrations, tensions began to rise. President Kiir accused the former Vice President Machar of attempting a coup against his government, something which Machar adamantly denied. Soldiers loyal to both Kiir and Machar began attacking each other in armed battles throughout South Sudan.

As the conflict escalated, Machar fled the capital, Juba, and subsequently led the rebellion against the president. The once politically charged conflict soon became ethnically charged as two of the largest ethnic groups in South Sudan, the Dinka and the Nuer, aligned in ethnic-drawn camps, supporting either Dinka for President Kiir or Nuer for Vice President Machar.

The political turmoil turned ethnic strife have dragged the efforts to bring about peace in the region through the mud as the two sides have shown little sign of abating or respecting international agreements. A formal cease-fire in January was widely ignored by both sides.

In a sign of growing frustration, Washington has imposed sanctions on both sides of the conflict, saying the violence must stop or further measures will be taken. The conflict has claimed the lives of thousands of people and it is reported that more than 1 million have become refugees in neighboring nations.

Secretary of State John Kerry has ramped up the diplomatic pressure, convincing President Kiir to open up dialogue with former Vice President Machar and his rebel opponents. In the same breath Kerry called Machar, pressing him to receive Kiir’s invitation for dialogue.

Kerry made clear his commitment to securing peace in South Sudan, and gave harsh words for those who threaten to disrupt the ongoing peace-making process.  “There will be accountability and implications if people do not join onto this legitimate effort.” said Kerry. Kerry’s visit to South Sudan is his first as Secretary of State.

Ban Ki-Moon’s visit to the world’s youngest nation torn in a civil war came only a few days after Kerry’s visit, and it is said that Ban Ki-Moon will continue pushing Kerry’s efforts of getting both the president and former vice president to open up dialogue.

Even with pending talks between the former political partners, the situation in South Sudan seems bleak, with widespread violence reeking havoc across the country. State Department spokeswoman Jen Psaki reprimanded the South Sudan government for their role in breaking the cease-fire on several occasions, most notably a recent attack on a rebel-held area in Bentiu.