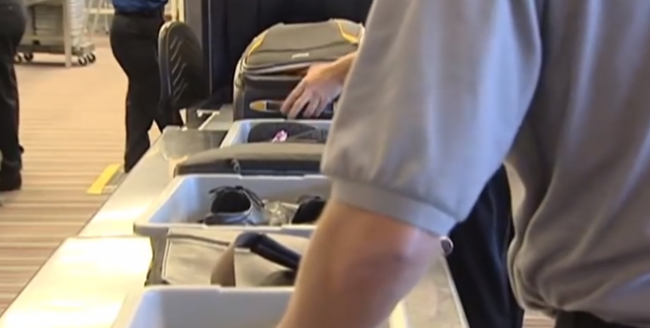 Science may have solved airport security bottlenecks, resulting in easier travel, thanks to the lab that created the atomic bomb. Los Alamos National Laboratory (LANL) was designated as site Y for the Manhattan Project back in 1943. Its sole purpose, under the scientific guidance of J. Robert Openheim, was to build the atomic bombs that were used to level the Japanese cities of Nagasaki and Hiroshima and to end WWII. Now, though, the lab is charged with finding scientific solutions to issues that plague national security – like how to get passengers through airport security lines faster. LANL is part of a 36-mile campus that sits about 35 miles northwest of Santa Fe, New Mexico.

In May 2014, LANL posted an informational video about a scientific project that it has been working on under a Department of Homeland Defense grant. Scientists at the lab have developed an application for nuclear magnetic resonance (NMR) that may speed the bottleneck, and sometimes trauma, for passengers going through airport security gates. The video is embedded at the end of this article.

Post 9/11 air travel has become far less convenient than it was before the attack on the Twin Towers and the Pentagon. Security lines at airports in America move slowly, the process of dressing down to get through the X-ray scanners is inconvenient, and the inspection of personal items can be embarrassing. Perhaps most frustrating for passengers, though, is the stringent prohibition against all liquid items in containers that carry more than three ounces.

Buying additional shampoo, conditioner, toothpaste, and lotions at airports instead of bringing them from home creates unnecessary expense. Not being able to take perfume on a trip is bothersome. Being a parent who cannot take baby formula or water past the security gate is problematic and expensive. Wearing contacts, however, can lead to a concussion.

In 2007, Robin Kassner found herself slammed to the ground by a TSA agent for having contact lens solution in her bag. The agent smashed her head into the inspection table so hard that it caused a concussion and possible brain damage. She sued the airport for $10 million.

Kassner’s situation could have been avoided if the X-ray machines at Reagan airport could have identified the contents of her containers. Regular X-ray machines do not have the ability to identify compounds, which is what would be necessary to be able to determine whether a squeeze tube contains minty fresh toothpaste as opposed to, say, plastic explosives. The science of nuclear magnetic resonance (NMR) imaging technology, however, may have solved this by being able to identify liquids, the part of going through airport security that causes the biggest bottlenecks.

Nuclear magnetic resonance has a variety of industrial and medical applications. The technology is present, for example, in the MRI medical diagnostic tests. Using NMR spectrometers, scientists can identify compounds and determine their purity. The radio waves and static magnetic fields used in NMR technologies cause no destruction when scientists use them to test biological samples, so they are useful when studying expensive biological samples like DNA. The petroleum industry uses NMR to determine the porosity of rock and locate pore fluids like water, oil, and gas. Now the technology is promising to speed up air travel.

Homeland Security approached the national lab and asked its team of scientists to investigate if, perhaps, NMR could be incorporated into the airport security process to speed up the identification of liquids. LANL accepted the challenge. Michelle Epsy, a Los Alamos Team Scientist, is pleased with the signature her team has been able to create in combining X-ray and MRI. In the video at the end of the article, Larry Schultz, MagRay Engineer and team mate of Epsy, says, “What we’d really like to be able to do is scan liquids right on the conveyor belt in the stream of traffic with everything else that’s going through at airports.”

According to Epsy, the Program Director for the project tasked with finding a way to integrate NMR with X-ray, the next step is to partner with an X-ray company. Epsy said people from industry have come to the lab for a demonstration of the technology. “And that’s been very exciting because the next step is really to work with an x-ray company, to bring the NMR part to existing x-ray technology that’s already in airport,” she said.

As the summer travel season is upon the nation, travelers coming into and out of the United States would surely appreciate the ability to once again pack their own shampoo and slog a bottle of water or two through the security lines. Once an x-ray company partners with the the national lab to incorporate the NMR science into the nation’s x-ray machines, the problem of airport security bottlenecks will be solved.