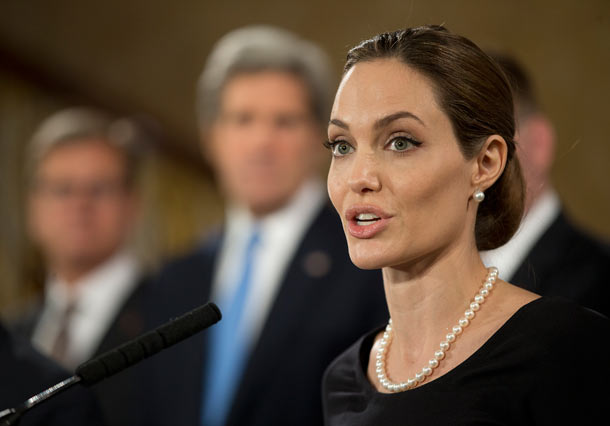 Hollywood actress Angelina Jolie, teamed with British Foreign Secretary William Hague, began Tuesday a four day summit to fight the problem of rape during war. The largest event of its sort, the event is being hosted by the UK government.

“It is a myth that rape is…inevitable [during] conflict,” said Jolie, who also serves as a UN Special Envoy. The unlikely pair began a campaign against sexual violence two years ago after the debut of Jolie’s film, “In the Land of Blood and Honey,” which was set during the 1992-95 Bosnian war where an estimated 20,000 women were raped.

Also at the summit were representatives from 100 countries as well as groups of rape survivors, religious leaders and NGO members. Hague spoke on the first day urging the international community to believe in a global solution.

“From the abolition of slavery,” said Hague, “to the adoption of the Arms Trade Treaty, [it has been] shown…the international community can tackle vast…problems.”

Jolie echoed Hague’s words while outlining the four main goals of the summit. The first stated aim is for the international community to create new protocol on documenting sexual violence during war and bolster domestic laws pertaining to it.

Other objectives discussed included the improved training of soldiers and peacekeepers to recognize and halt sexual violence, as well as a definitive change of attitude about rape worldwide.

Hague took a step towards implementing the last goal, to provide victims of rape increased funding, with his announcing a $10 million donation from the British government to those affected.

While Jolie and Hague took turns speaking of the optimism surrounding the issue, they also shared concerning statistics. According to the UN agency for children (UNICEF), at least 73 million boys and 150 million girls are sexually victimized each year, and those in war torn areas are most vulnerable. During the genocide of Rwanda in 1994, it is estimated that 250,000 to 400,000 women were raped.

The summit also comes on the heels of violent acts against women including the fatal stoning of a pregnant woman in Pakistan, the kidnap of 200 Nigerian girls and the rape and murder of two Indian girls. Like these cases, many incidents of sexual violence go unpunished, preventing the victims closure.

“They feel above the law,” said Jolie, “because the law [barely] touches them and society tolerates them.”

The summit against rape commenced today, but Jolie has been involved with sexual abuse victims since 2001 when she visited Sierra Leone. Traveling as a Goodwill Ambassador for the UN High Comission for Refugees (UNHCR), Jolie met a number of the estimated 60,000 women who were raped during the civil war there.

Amnesty International also responded to the summit, saying it was “time to deliver” on the goal of ending sexual violence during conflict. Another supportive voice came from Pope Francis, who tweeted Tuesday, “Let us pray for…victims of sexual violence in conflict, and those [trying] to end this crime.”

The summit led by Angelina Jolie began Tuesday in hopes to gain international support for the fight against rape during war. “We need to see real commitment,” she said, “and go after the worst perpetrators…fund proper protection for vulnerable people, and to step in [and] help the worst-affected [places].”