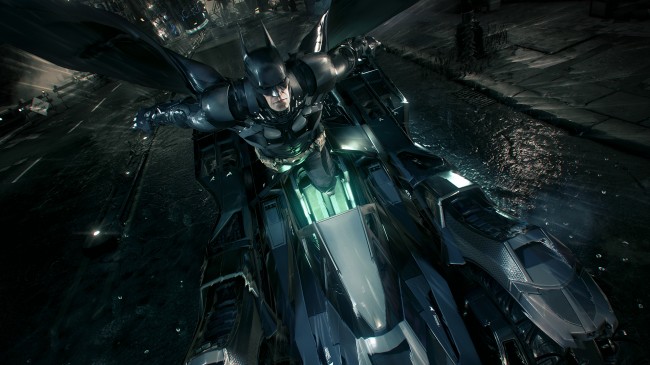 Warner Bros. Interactive and Rocksteady games released the latest trailer for Batman: Arkham Knight this week. The trailer showcases Batman’s signature vehicle, the Batmobile, and the car’s ability to morph into “Battle Mode.” What’s more, the trailer drops an atomic bombshell regarding the release of the highly anticipated sequel. Per the new trailer, Batman: Arkham Knight will be released in 2015 instead of October 2014.

The short video clip features Batman tearing through the streets of Gotham City in the Batmobile. The car then comes to a halt and morphs into its combat-ready Battle Mode. The features of the Battle Mode include: a 60mm cannon with kinetic energy penetrating rounds; a Vulcan Gun with armor-piercing incendiary rounds, best used for taking down tanks and surface-to-air combat; a riot suppressor with non-lethal rounds; and missile barrage launchers located on the back end, with blast-fragmentation missiles guided by a laser and GPS system. Without a doubt, the Batmobile appears to be one of the major selling points of the game. Gamers have desired to drive the Batmobile in this franchise for quite some time.

According to an early USgamer.net preview of the game, the Batmobile also contains tasers that will stun thugs who approach the vehicle on foot. The machine can be operated remotely by Batman as well. Rocksteady designed its own unique take on the Batmobile exclusively for the game. In addition, DC and Batman toymaker Mattel have also announced plans to sell an exclusive Batmobile toy, based on the version from Arkham Knight, at this year’s San Diego Comic-Con. The item is in scale for Mattel’s 3.75 inch figures and is priced at $85.

The biggest news from the trailer is that the game has been delayed for a 2015 release, next year. Originally, the game was being readied for an October 2014 release.  Bleeding Cool seemingly called the delay as early as April 2014. In its report of the DC All Access panel at the 2014 WonderCon, the panel reportedly showed a new trailer of Batman: Arkham Knight, confirming the project would arrive in 2015. Other conflicting reports of the same panel said that the game was still on track for 2014. Perhaps the logo for the WonderCon trailer did show 2015, but Warner Bros. Interactive and Rocksteady Games were not yet ready to clarify the delay. Fans should not panic over a delay since Rocksteady is getting more time to make sure the game is as close to perfect as possible. The game will be even more polished in 2015. One of the major criticisms of last year’s Batman: Arkham Origins was the copious amount of glitches.

Besides the addition of the Batmobile, Batman: Arkham Knight will feature a new story in which Batman is pitted against his most dangerous foes. Scarecrow unites with Batman’s worst enemies in an effort to kill the Bat once and for all. What’s more, there is a new villain on the streets, the enigmatic and armored Arkham Knight. Arkham Knight’s identity has been shrouded in mystery, leading to much fan debate. While the game might have fallen short in its target release period for the holidays, 2015 will be a major year for Batman.