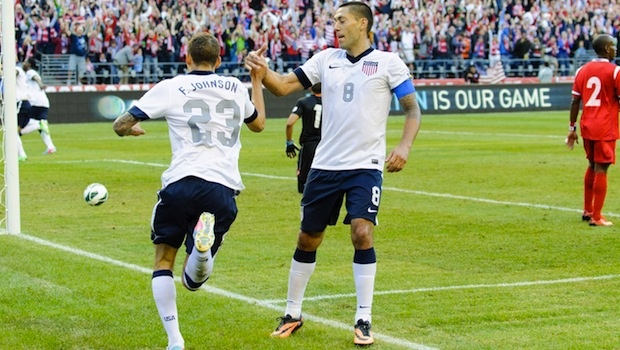 Clint Dempsey and Fabian Johnson led the U.S. men’s team to victory today in an international friendly game against Turkey at New Jersey’s Red Bull Arena. The match itself proved to be a much better test for the U.S. as they prepare to face Ghana this month at the World Cup in Brazil. The two goals spoke to the team’s ability to penetrate a more challenging defense than they faced last week against Azerbaijan. With Dempsey back in the picture following a brief hiatus last week due to a minor groin injury, the U.S. offense had tenacity up top. Defensively, the Turkish offense proved to be a challenge for the U.S. and exposed several weaknesses in coach Jeurgen Klinnsman’s inexperienced back four.

There was a hint of relief in the air following the U.S. victory over Azerbaijan last week, however the luxury was short-lived in the context of what teams the U.S. would be facing in Brazil this month. A 2-0 win against the 84th ranked team was not so reassuring. The importance of the game today was in Turkey’s relative comparability to Ghana insofar as FIFA rankings go. Fabian Johnson came out strong from the outset and was rewarded by a brilliant chip over the Turkish defense by Michael Bradley in the 27th, resulting in the U.S. team’s first goal of the match. Johnson’s goal was his first for the national team, and yet another demonstration of the defender’s capability to be an offensive threat.

The U.S. opted for a 4-4-2, packing on the heat with a diamond formation in the midfield. Bradley took the attacking midfielder position, as Jozy Altidore and Clint Dempsey were paired-off up top. Jermaine Jones was the holding central midfielder. Offensively, there was an observable improvement from last week’s game against Azerbaijan. Although Altidore was unable to snag a goal for the team, he did a great job of holding the ball and getting it into the mix to create opportunities up top. That said, his persona as a playmaker had commentators wondering where his sense of urgency had gone. Altidore has not scored a goal since last December.

While Taylor Twellman and Alexi Lalas expressed confidence in the U.S. offense, there was much less to say about the team’s showing on defense. The offense was described as “inventive,” but all that Lalas could constructively convey about the back line was that “they look[ed] like a group that hasn’t played together.” Bottom line: a back four is not built over night, Lalas added.

After Clint Dempsey scored in the 52nd minute, the U.S. defense continued to break down. A “lackadaisical” error on behalf of Timmy Chandler gave the Turkish offense a chance to be dangerous in the box. Geoff Cameron blocked a shot by way of an unavoidable handball, winning Turkey a penalty kick. Turkey’s Selçuk Inan capitalized on the opportunity with a fabulous penalty kick that U.S. goalkeeper Brad Gozan was unable to block. Gozan, in for Tim Howard, as well as John Brooks and Kyle Beckerman, started the second half. Later additions to the second half lineup were Joe Green and Mix Diskerud.

At the close of the game, Twellman noted that the experience today was “worth a thousand times more” than anything that happened in the Azerbaijan game last week. However, it does not appear to bring any relief to the proverbial elephant in the room regarding the U.S. back four. Clint Dempsey commemorated his return with a goal, whereas Fabian Johnson gave a great demonstration of his ability to be an offensive threat out of the back, however, fears abound regarding the defense’s ability to do its job in the defensive third.

Clint Dempsey and Fabian Johnson Lead U.S. in 2-1 Win Over Turkey [VIDEO] added by Courtney on June 1, 2014
View all posts by Courtney →