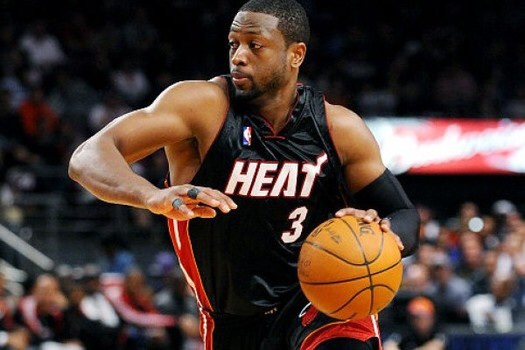 Dwayne Wade’s Miami Heat days may be numbered. The 32-year-old shooting guard has decided to “opt out” of his current contract and become a free agent. The 11-year veteran has played his entire career with the franchise. However, sources are uncertain what Wade’s future will be going forward. Wade maintains a close friendship with his teammate LeBron James, but there is no clarity in reports that indicate as to where the two all-stars will play next season.

Wade resigned with Miami in the summer of 2010 and was joined by free agents LeBron and Chris Bosh. “The Big Three” was formed and the trio never looked back. Two consecutive championships and four straight NBA finals appearances have put things in a slightly different perspective for the Heat. Coming off a lopsided Finals loss at the hands of the San Antonio Spurs, Miami often looked overmatched. LeBron James appeared to be the only player for the Heat consistently playing at a high level offensively. The team’s front office is now believed to be seeking players to help the Heat’s supporting cast.

The four-time MVP has opted out of his contract earlier last week, leading to speculation that LeBron may be headed elsewhere. Regardless of LeBron’s pending decision. The three friends allegedly met Friday to discuss their futures. Wade was due to make 42 million dollars over the next two seasons. Once known coined as “The Flash,” by former teammate Shaquille O’Neal, Wade has been slowed in recent years by nagging injuries and sore knees.

Despite shooting a career high 54 percent from the field, Wade was heavily criticized this season for missing 28 regular season games. The perennial all-star was highly efficient when he played, but only averaged a career low 19 points per game and 32 minutes. Most of the games Wade missed were referred to as preemptive by the team. In theory the Heat wanted Wade to be fresh for the playoffs. However, by the NBA Finals Wade looked a step slow and lacked the explosion spectators have grown accustomed to seeing when the veteran is healthy.

Wade averaged just 15 points on 43 percent shooting during the NBA finals. This left James without sufficient scoring help. Wade has been selected to the all-star team 10 times, won three out of his five NBA finals appearances, and took home the 2006 NBA finals MVP. Making him “unquestionably the most accomplished” player in franchise history.

With his recent decision to be become a free agent, many have questioned Wade’s ability to stay healthy. The Miami Heat have not yet been in talks to make a splash in free agency. However, they acquired LeBron’s “favorite player” in the Thursday’s draft, Shabazz Napier. The Uconn standout can play point guard, a position that Mario Chalmers, and Norris Cole have struggled to produce at.

The Heat may look to sign Toronto free agent point guard, Kyle Lowry, according to several sources. Since Wade has become a free agent there appears to be a growing increase in the likelihood that The Big Three will take less money, in an effort to bring in younger talent. For now the future of Wade, the heat and his south beach pals remain a question mark.