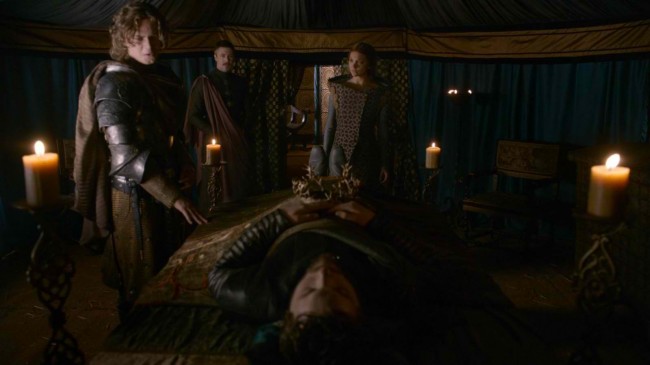 A death scene of one lucky fan in the Game of Thrones book series, Songs of Ice and Fire, is available for charity. The author, George R.R. Martin is willing to create a new character of one lucky fan, and that character will meet a gruesome end. Those who have read the books or watched the TV show know that gruesome certainly means just that.

Martin wants to raise money for various charities, including the New Mexico wolf charity, and believes that the Game of Thrones fans will help him with just that. It is possible to donate anything between $10 and $20,000 to the cause, and the popular author will give something away for the donations. The more someone donates, the bigger the prize will be. T-shirts are available for those with smaller budgets, but it is possible to win tickets to the season five premiere and a chance to be featured in one of the novels for those willing to dig a little deeper.

Those who donate the $20,000 will be placed in a pot and a winner will be picked at random. That winner will get some creative control over the character, such as the rank and gender. From there, Martin will take over with his imagination, add the character into the storyline and find the best way to kill it off. Could it be a beheading at the hands of the current King of Westeros? Or will the character die suddenly and unexpectedly like poor Robb and Catelyn Stark?

There is more than a Game of Thrones death scene for one lucky fan available for the charity donations. Those who donate $4,500 will be placed in a draw for winning the first script of the show signed by the cast and crew. Those who donate $7,500 will have the chance to win tickets to the premiere of the fifth season, due next year. Some fans will even get their hands on a map of the fictional world, and have the chance to finally put the locations together. Thank you videos are also available for the author to show his appreciation of his fan-base.

The charitable donations are made through a crowdfunding campaign that the hit series author has set up. For this campaign, all the money will go towards the Wild Spirit Wolf Sanctuary, which houses mostly rescued wolf-pups and wolves. Martin explains that wolves are one of his favorite animals, whether they are the real wolves found in the USA or the direwolves added into his fictional world of Westeros.

Fans are already signing up to have their chance to be killed off in their favorite book series. Four thousand people have made the top donation, and there will be many more following. Only 23 maps of Westeros remain at the time of writing this, and just 28 cookbooks. Some of the other offers have already gone as fans have given all they can. However, there is still the chance to be that lucky fan who has a personal death scene written into the Game of Thrones book series for their charitable donation.