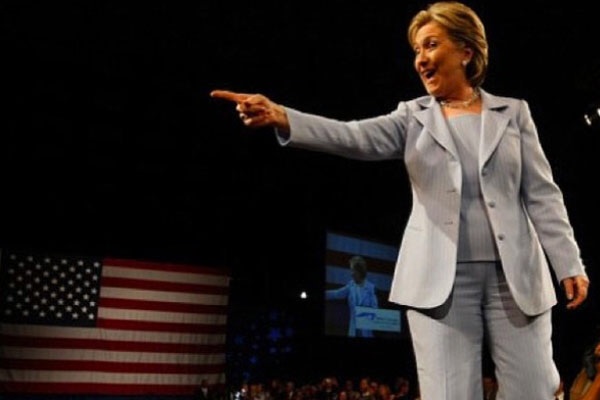 Hillary Clinton, currently has a memoir out in stores. The book is not selling quite as swiftly as Clinton or its publisher would have imagined. The former First Lady and Secretary of State’s memoir, Hard Choices appears to be having a rather difficult time getting off the shelves. During its second week, Hillary Clinton’s Hard Choices sold just 48,000 copies as sales fell quicker than expected.

The book was released on June 10 and 85,000 physical copies were sold, according to Nielsen BookScan. The popular book vendor subscription service inventories sales record for books across the U.S. Electronic books sales totaled to around 15,000 copies for Clinton’s memoir. Meaning first week sales plummeted 43.5 percent during the books “second week on the shelves.” Simon & Schuster, the book’s publisher is now faced with a dilemma. In figuring Clinton’s book would fly off shelves, the company shelled out a hefty advance reportedly of $14 million.

First week book sales are critical as they often “account” for roughly 30 percent of total sales. This sales trend is similar to when a music artist releases an album and typically the first week sales contribute heavily to the album’s overall sales. The reason behind this occurrence is because literary works thrive off of “publicity” and specified time sensitive promotion. Often “publicity blitzes” boost up first week sales of publications and allow for functions like book signings to maximize sales and marketability.

Prior to the quick fall in sales for week two Hard Choices was already a growing concern for Clinton. The publisher has already ordered and placed a million copies of the book in vendor stores. With the pace the memoir is currently selling at there is little chance its publisher “will make up for Mrs. Clinton’s advance.” Nonetheless, the book will be the crowned number one on New York Times’ best sellers list, in the “hardcover non-fiction” category.

Clinton’s memoir is about her time working as Secretary of State under the Obama Administration. Simon & Schuster previously published Hillary Clinton’s 2003 memoir, Living History, the book was quite successful and sold well over one million copies world-wide. The predecessor of Hard Choices details Clinton’s life as First Lady while the latter memoir will cover more of her foreign policy experiences.

Clinton has recently come under criticism about answers to financial inquiries that she retorted to ABC “at the start of her book tour.” Clinton was quoted as saying that her family came out of the White House “dead broke,” and “in debt.” Many people have taken offense or cynically scrutinized the former First Lady since the comments were reported. The rationale behind her critics fury stems from Clinton using terms that typically apply to the “average person.” While the Clinton’s family did endure financial hardships after their stint at White House concluded, unlike the “average person,” they had power and the resources necessary to reestablish their wealth. Such as the huge book deal Clinton scored prior to the end of her husband’s tenure as President.

While many view Clinton as a potential presidential candidate to succeed President Barack Obama in the 2016 election, she has refused to confirm or deny if she will run. Hard Choices will serve as a reference point for all to dissect. Despite the quick fall of Hillary Clinton’s week two sales for the Hard Choices memoir, the book should have a significant impact on her public perception. That includes those who never bother pick it up, as political words, tend to carry and creep through all social mediums.