Michael Jackson – Billy Jean Played Like You Have Never Heard Before 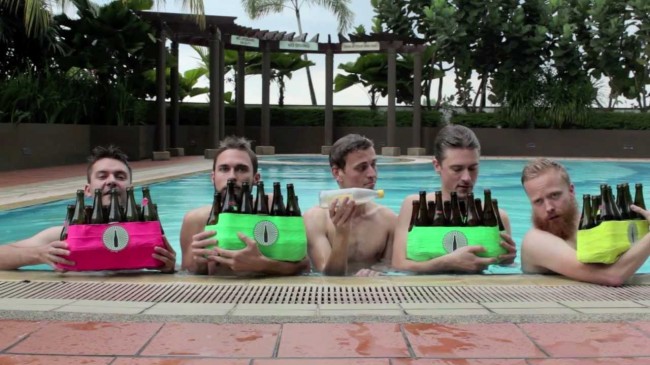 A new sensation is hitting the web, including YouTube and iTunes, and they call themselves The Bottle Boys and they are playing Michael Jackson’s Billy Jean like you have never heard it before. They come from Denmark and have just put their first song on iTunes, which is their rendition of the hugely popular Party Rock Anthem. This is currently on YouTube so it stands to reason that it has become so popular that it is now being offered as a full fledged song. These guys are using bottles of every kind and variety to re-do some of today’s most popular hits. They are five guys on a mission to reinvent how to make music, and the fans are not sure what to think about it yet. It is different and inventive and yes, actually pretty good, there is some talent in there somewhere. It cannot be easy to coordinate five guys and approximately 30 beer bottles into what can be considered a cohesive rendition of the King of Pop’s mega hit. Some have even compared them to the popular Blue Man Group of Vegas. Whatever it is that attracts the fans to them, this rendition of the famous Jackson song will make many a believer and many a critic.

The Bottle Boys were on Britain’s got Talent in 2013 and have done renditions of Under the Sea, and the pop hit Call Me Maybe. They seem to have a video for just about anyone’s taste, including the fans of Michael Jackson. Many will be surprised at how good this sounds on bottles, and many have found themselves tapping a toe, when they thought they would just be watching a funny or silly rendition of the song. The group has amassed many fans but also many haters, as they make it look so easy that a good number of viewers believe this is just ridiculous and requires no talent whatsoever. Judge for yourself and ride the wave into The Bottle Boys growing fan base, or turn the corner and add to their critics, either way it is definitely worth a listen.

These guys have some kind of talent that is not readily definable, and the women will certainly find them easy to look at, but what is really captivating is how much fun they seem to be having while performing. Included below is the Michael Jackson hit Billy Jean, and should you enjoy it, you will find many more out there. They blasted into the states with the Little Mermaid cover song, and began gaining a following with their crazy good mash up of several of today’s hottest hip hop songs. Hailing from Denmark and performing in Britain, some wonder at the name of the group. Bottle Boys was the name of a popular British television sitcom, so finding information about this group takes some digging, unless you just want to listen to their music, and in that case finding them is no problem. Find below Billy Jean by Michael Jackson performed on numerous beer bottles by five guys ready to take the world by storm.