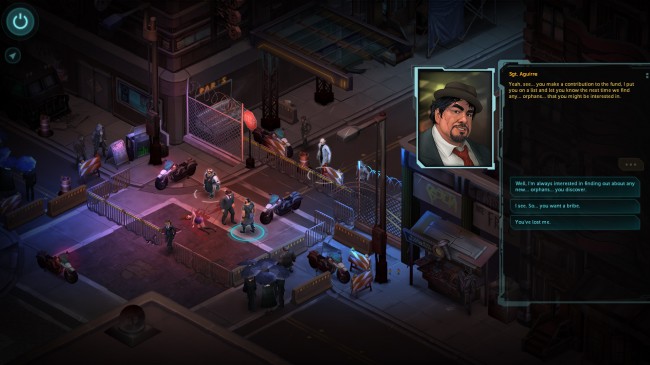 Shadowrun has indeed returned with a vengeance. Created by Jordan Weisman, it is one of the tabletop role-playing games that has survived through the decades in many incarnations, including video games and novels. The first edition rules were published in 1989, depicting a future world (circa 2050) where cybernetics, magic, and fantasy races and creatures co-exist in what is called the “Sixth World.” A blend of cyberpunk and fantasy, the setting is of a world where new nations exist over the old ones and mega-corporations are run by dragons. The Shadowrun franchise, besides the video games and novels, includes role-playing source books, and most recently, a new PC game.

Shadowrun Returns, the PC game, was put out by a very small, Seattle-based company called Hairbrained Schemes, helmed by no other than… Jordan Weisman. It should be noted that Weisman also founded FASA Corporation back in 1980, which published his other creations, Battletech/Mechwarrior and Earthdawn. What should also be noted is that Shadowrun Returns was crowdfunded on Kickstarter, which a popular way to finance projects.

Shadowrun Returns gets back to the original Shadowrun roots with a vengeance, right up to its game master styled narration in the storytelling. As a throwback to the heydays of the computer roleplaying games of the 80s and early 90s, the gameworld is displayed in an isometric view, as in Baldur’s Gate and Icewind Dale.

Upon playing the game, one immediately gets the impression of the original Shadowrun tabletop gameplay. It has Weisman’s imprint all over it, from character generation straight out of the tabletop rulebook to the game master narration style and setting. Unlike other modern games, there is no voice acting and only the one view of the gameworld. The lack of voice acting and this limited view is only a minor distraction, and one that’s quickly forgotten in the first campaign’s immersive storyline. The recent release of a second official campaign, Dragonfall, set in Berlin, only deepens the richness of the original Shadowrun world.

Shadowrun Returns has one other main feature that should ensure the game’s replay value for a very long time: a robust game editor. Here, players can create their own campaigns with this powerful tool, and already there is a fast growing modder community doing just that. They have created new stories and recreated other Shadowrun sourcebooks such as the Street Samurai Catalog and Grimoire content that provide the game with additional gear and spells. The actual art of the game is very reminiscent of that used in the rules and sourcebooks, further adding to the settings’ original Shadowrun feel.

Currently Shadowrun Returns is available through Steam and at GoG and Humble. Anticipation of additional official content as well as community content makes this game a must-have for those who grew up with Shadowrun as well as the new generation of gamers who may have never seen a native isometric view gameworld.

Should Weisman decide to take this approach with his other famous creation, Battletech, who knows what kind of fan following that would generate. Shadowrun Returns is an apt title, for Shadowrun has returned…with a vengeance.