Shane Battier Retirement Imminent as He Signs With ESPN 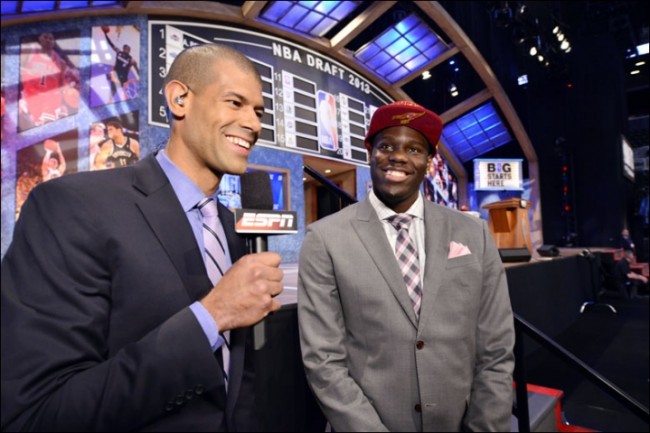 Kenny Smith. Mark Jackson. Steve Kerr. All three of these players were known to have high basketball IQs upon leaving the NBA, which soon after led them to successful careers as announcers in the NBA. Shane Battier, another player with a high level of knowledge for the game, will also become an announcer after the current NBA Finals concludes, but instead of calling the NBA, he will go back to where he began his career — by announcing NCAA games for ESPN.

Unlike a number of players who turn pro after a couple of years in college, Battier elected to graduate with a BA in religion before making it to the pros. This speaks volume to what many have said about the defensive specialist throughout his entire career. He is one of the most intelligent men to ever grace the basketball court. So much so that many past teammates have even stated that they would not be surprised if the Duke standout may become president one day. Ironically, he was invited to join the Detroit Senate this year, but instead declined to pursue a stress-free job at the side of the court.

Battier is well spoken, which is what makes him perfect for the job of an announcer. Also, while he is known to be a great defender and teammate in the NBA, it was his college career that was, arguably, his most successful. During his time at Duke, he led the school to two back-to-back Final Four appearances, the latter resulting in winning a championship. It was in that final year, he saw the best numbers of his career with averages of 19.9 ppg, 7.3 rpg, 2.1 apg and 2.3 bpg.

He could have become an All-Star, and while his first season appeared to be headed in that direction with 14.4 ppg, 1.6 spg and 1 bpg, he did the selfless thing and became a role player by being one of the best defenders in the league. He also has proven to be quite the three-point threat during his tenure. While he was a valued asset on the court, it may be his unselfishness that distinguished him from the rest, which was clearly exemplified this year when he won the teammate of the year award this past season.

Not only is Battier that defender who will anyone on the opposing squad, whether it was while he was on the Memphis Grizzlies, Houston Rockets or, currently, the Miami Heat, he used his intelligence and confidence to be one of the locker room leaders. As such, he has taught several incoming players through example, even if it is not noticeable by his numbers on the court.

This is the thing about Battier. Despite being 35, he very well could have played more seasons in the NBA, but he realizes he has nothing left to prove in the league. He also has the brains to realize that, physically, he is deteriorating. Unfortunately, his 2013-2014 season numbers have been the lowest of his career. He currently is only averaging 4.1 ppg, .7 spg and .5 bpg at 20 mpg. As such, he knows he no longer can contribute to the extent he used to. While he has taken pride in helping the Heat win championships the last few years, he also has chosen to go out on his terms. He does not want to be a player that overstays his welcome; instead, win or lose, he will be leaving the league after these finals.

This certainly will not be the end of Battier’s public persona though. Next year he will bring an added level of class and critique to the announcing team at ESPN for the NCAA. Moreover, it would not be surprise if the Duke prodigy moves beyond his post-NBA career as an NCAA announcer. While he has no plans to do so currently, he has the makeup to be a head coach someday. From his diverse knowledge of the game, to his leadership skills and knack for specializing in defense, he would make an ideal candidate. However, while he declined politics at this juncture, it would not be a surprise for him to move beyond the world of basketball. Regardless of what Shane Battier does, one thing is for sure, the sky is the limit for the soon-to-be ex-NBA forward.