The Internet Keeps Getting Faster 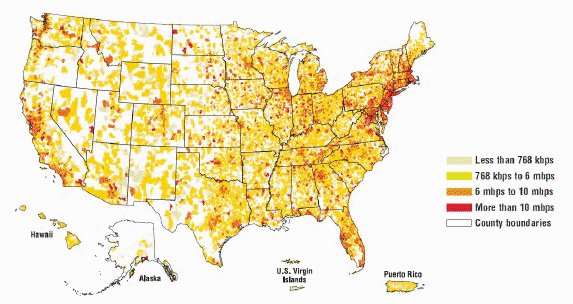 The internet as civilians know it was introduced in the mid-1980’s, the first time the term was used was in 1982. However, its story starts two and a half decades earlier, during the Space Race. After Sputnik was launched in 1957, the U.S. was determined to reclaim technological superiority, so they formed ARPA (Advanced Project Research Agency). During the 1960s ARPA was conducting research on what would later become ARPANET. In 1969 ARPANET was launched as a back-up for traditional communications, in case a military attack compromised communications. When first launched, ARPANET’s backbone speed was only 56 Kbps (kilobits per second). By 1988 the internet received server upgrades to keep users happy, and started reaching speeds over 28 times faster.

Though the speed was 28 times quicker after ARPANET joined with NSFNET, it would still be considered a slow network by modern standards. Bytes are now more commonly used, because they do not use binary code. There are about 8 bits per Byte, so the 1.544 Mbps is actually only about 196 KBps which is not even fast enough to be considered 3G speeds on a mobile network. This was in the backbone, which traditionally has the fastest speeds, as it provides internet to the internet service providers (ISPs).

In 1989, there were over 100,000 hosts. So in 1991, NSFNET had to make the backbone faster, to keep acceptable speeds for the increasing number of internet hosts. In 1991 NSFNET introduced their T3 servers which boosted backbone speeds to 5.6 MBps. That year servers broke 1 trillion bytes per month due to the increase in speed. This also helped the number of hosts to break 1 million in 1992.

The year 1996 saw another jump in backbone speed, this time reaching 77.75 MBps. Today that speed would be about equivalent to commercial internet sold to larger businesses. This boost brought the average user speed up to 1.5 Mbps, which is just under the backbone speed in 1988. This also meant that the most users fell in the broadband territory, under every variation of the then ill-defined term.

By 1999, it was again time for an upgrade, this time the backbone jumped up to an impressive 320 MBps. This speed was not universal across the whole network, only on a few network hubs. The process to upgrade all the hubs took longer this time around simply because the sheer number of hubs and the increase in American users. The upgrades had to be cycled so the speeds would not be compromised as a whole.

The Abilene network was crucial to U.S. so the years between 2000 and 2003 saw numerous advances to the network. The first advance being their introduction of the IPv6 (Internet Protocol version 6), which has yet to break even 4 percent usage in the U.S. The next step was reaching 10Gbps in the Abilene Hub. This was no doubt due to the use of fiber optic cables, as reaching speeds over 1 GBps is almost impossible without the use of light to transfer information. Nevertheless, if enough cables are bundled together it is theoretically possible, but they would be more susceptible to electromagnetic interference such as crosstalk, and more speed will be lost due to attenuation.

The Abilene network was phased out to be replaced by Level 3 Connections in 2007. That same year Internet2 was given the last upgrade to date, which was truly momentous in comparison to the others, a lightning fast 100 Gbps was achieved from east to west coast. This is 10 times faster than the fastest domestic speed provided in only a handful of cities by way of Google fiber.

The above mentioned internet networks have been predominantly for commercial use, however not every network is created equal. There have been a handful of networks reserved for military and/or educational use. The first of which, ARPANET, was originally commissioned by the DoD (Department of Defense), but eventually it became a commercial network. Before ARPANET sold ou to citizens, the Department of Energy created their own network in collaboration with National Energy Research Scientific Computing Center. In 1976 the Magnetic Fusion Energy Network was created to connect various research laboratories. Four short years later another research network was created by the same group of people, for almost the same reason. In 1980 the High Energy Physics Network was implemented for the national research labs to be able to transfer information with various particle physicists.

In 1986 the group realized the redundancy of having two networks and merged into one. ESnet (Energy Science Network) connects a score of scientists together, so collaborations do not have to be in the same place, nor do the scientists have to be burdened by a long wait for information. In 2010, ESnet joined with Internet2 to create what many headlines have dubbed the Shadow Internet that many have associated with NASA. Truth is, it is the same ESnet with access to dark fiber, NASA is just one of the many interconnected research facilities. Dark fiber is the unused capacity of the backbone, which by now is mostly transferred via fiber optic cables. ESnet, with the help Dark Fiber connections, accomplished a new speed record, attaining an average speed of 91 Mbps on an indirect path, from coast to coast across the U.S. In just over 30 years of commercial use, the internet has gotten faster at an astonishing rate, as long as the concept of net neutrality is not abandoned, it will hopefully keep gaining speed ad infinitum.