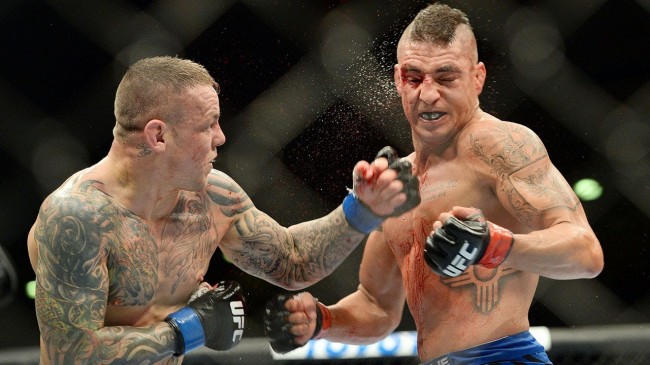 UFC Fight Night: Henderson vs. Khabilov was live Saturday night from Albuquerque, New Mexico and featured one of the most disastrous judging decisions in professional MMA history. That decision came in the co-main event, in which lightweight Diego Sanchez won a split decision over Ross Pearson by the score of 30-27, 29-28, 27-30.

To set the record straight, Ross Pearson was absolutely robbed. He was robbed of the victory, robbed of a fat paycheck and robbed of the ability to renegotiate his contract with the UFC coming off a win, as this was the last fight on his deal. For three rounds he outstruck, outmaneuvered, and basically just outclassed Sanchez in every fighting metric possible, and yet his hand was not raised at the end of the match. Instead, the crowd popped as Bruce Buffer read the decision for Sanchez, a New Mexico native and fan favorite. If the fight were hosted in any other city in the world, only the sound of confused murmurs, not cheers, would be audible.

The UFC, and MMA in general, is still experiencing growing pains when it comes to capable judging. It seems like every week there is a new judging controversy for fans and observers to argue about at the water cooler on Monday morning, but that is not necessarily because judging is getting worse, but rather because there are just so many MMA events now taking place. On any given week viewers can find two or three professional events, consisting of a multitude of bouts. MMA has simply exploded in popularity, and the various promotions are all trying to secure their share of the market.

Gone are the days when the only thing for an MMA fan to do while waiting out the months in between UFC PPVs was to attend a local amateur show at an abandoned airplane hangar or banquet hall where their cousin held a wedding reception the week prior. The sport is established and the techniques and tactics employed in the cage are now well known by hardcore and casual fans alike. Simply put, it has become so much easier for the average person to tell who won a fight. So why is it professional judges cannot? And why is it that the movers and shakers in the MMA world are not moving heaven and Earth to get local athletic commissions to remedy the situation? The answer is because bad decisions actually help the sport and the UFC more than they hurt.

First of all, MMA is a sport and the fighters are some of, if not the best athletes in the world. MMA is also a show however. The circus is a part of the experience, and while promotions like the UFC have adopted a model further away from professional wrestling and closer to professional boxing, the antics that go on outside the cage count immeasurably. Whether it is a call out from one fighter to another in a press conference, or a war of words between promoters over Twitter, or a feud that is stoked on a fighting reality show, the fights themselves are usually the climax of a story, while at the same time being the catalyst for a new one. The Pearson/Sanchez fight, while only really intriguing to the more hardcore fans in its lead up, has in its catastrophe of a conclusion dominated the MMA news headlines and talk show agendas.

Going into Saturday, the story of the fight was simply this: Sanchez and Pearson are both winners of the The Ultimate Fighter reality show, season one and season nine respectively. Diego is likely a future hall-of-fame fighter who is on the downside of his career, but remains a draw, because of his tenacious attitude, reckless fighting style, and iron chin. Ross, an accomplished striker, is perhaps in the prime of his career and is looking to cement his status as a lightweight contender. Both guys were expected to do nothing more than heave leather at one another, and because Sanchez is well liked, he gets to fight in front of his hometown for the first time in his pro career. All of this is just good enough to be the co-main event on cable television Saturday night. But the disastrous judging was everything the UFC could have hoped for and more.

How could bad judging be in any way good for the Ultimate Fighting Championship? Well, the reasons are numerous.

The UFC does not use a tournament or elimination structure to determine rankings or book fights. While wins and losses are important, they do not hold nearly the weight that they do in say NFL football or NBA basketball, where a loss can simply end a team’s season outright. Wins and losses are not even as important as they are in the sport that MMA emulates most: pro boxing, where an accumulation of even a modest amount of losses can make a boxer forever irrelevant and unmarketable. Instead, MMA fighters are expected to lose now and then. It’s the nature of such unpredictable competition, and the UFC keeps the best fighters in the world under contract, so there is no such thing as an easy match up, right Renan Barao? Pearson’s loss does not relegate him to irrelevance, and because he did actually win, his stock must go up. It also goes up because he has gained fame through this debacle, all of it positive due in no small part to his humble attitude while petitioning the poor decision. The points he did not score on one judge’s scorecard have instead been scored in the hearts and minds of the new fans he has gained, although the UFC in no way needs to treat him like he won the fight as they negotiate a new contract with him, of course. On the flip side, Sanchez’s win, while far from impressive, is an official win nonetheless. While it might not count for much in the eyes of the hardcore fans, it is easy for the UFC to book him another fight and promote Sanchez as a fighter who has rebounded and is looking to put together a winning streak. Sanchez remains a main card fighter and is money in the bank for the UFC at least for a little while longer.

The judging debacle also keeps people talking after the fight is finished. The UFC has no say in who judges the fights and can even join in with the fans in publicly shaming the athletic commissions when their employees screw up. This keeps the UFC and the fans psychologically linked. The UFC is on the fan’s side and they have no problem attacking the government-run sanctioning bodies. Could there be an easier target? (Who does not love when Dana White goes on a tirade during a media scrum about how Steve Mazzagatti is the worst commissioned ref in the universe?) Their fighter was robbed, but more importantly their fans were robbed of a just decision, and the UFC will make sure everyone knows it. And in truth, fans do not show up to see decisions, they show up to see finishes, and since finishes can not be predicted, the fights remain must see television. Moreover, the likelihood of a botched decision is an extra dab of theater, of show, and so even the most mundane fight can be newsworthy due to strange scorecards.

When it comes down to it, newsworthiness is what keeps the UFC and MMA profitable, so while on the surface bad judging can seem disastrous to the sport, it instead is a boon, as it creates story lines inside the promotion and sports media, propelling future matchmaking for the promoters and content for the sports media. The only ones who suffer from this are the fighters on the wrong side of a debacle (though the smart ones can spin the loss to their advantage as mentioned above), the bad judges who should be punished by the commissions, and the specific sanctioning commission itself, who will never really enjoy good PR because they are still “the man” that everyone will be upset with in the end anyway.

There are many ways to minimize bad judging, such as changing the scoring from the archaic 10-Point Must Scoring System imported from boxing to a system that better accommodates MMA, to improving judge training and accountability, to mandating transparency of judge and fight scoring review. But do not look for there to be hard pushes for these judging changes, as the damage to the sport is minimal and  in fact the UFC and other promotions may actually benefit from the subsequent controversies more than they like to admit.