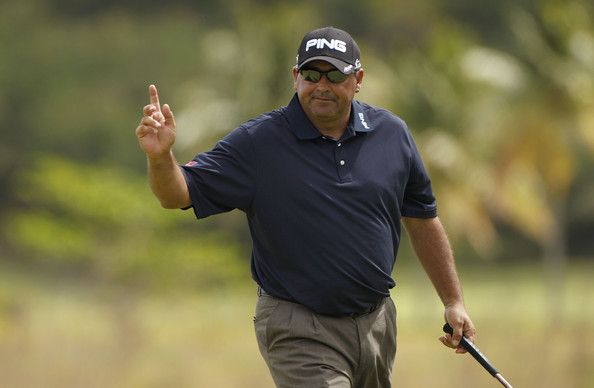 In continuing the series of Golf Shots columns which examines the odds on many of the players in the US Open Championship, here is a look at some of the dark horses for the tournament this weekend in Pinehurst, NC. These are players who are listed by Station Casinos Race & Sports Book at 30-1 odds or better, and why, or why not, they might be a good bet this weekend at Pinehurst No. 2.

Graeme McDowell (30-1) FedEx Cup Rank: 52 Scoring Average: 69.918 Official World Golf Ranking (OWGR): No. 22 McDowell looked to be in great form early in 2014, with four top-ten finishes in his first five tournaments of the year. That was why it was such a surprise when he missed the cut at the Masters. He went on to finish out of the top-20 in the RBC Heritage and the Players Championship and decided to go home to Orlando for a few weeks. His return, after a month, was at the St. Jude Classic last week to tune up for this week’s US Open Golf Championship where he merits consideration as a dark horse. His scoring average this year is better than many of the players who are listed at shorter odds, and his Irish upbringing might come in handy over the restored golf course at Pinehurst No. 2.

Luke Donald (30-1) FedEx Cup Rank: 44 Scoring Average: 70.292 OWGR: No. 18 Donald has quietly had a pretty good year to this point in 2014. In 10 PGA events, he has three top-ten finishes, including a runner-up finish at the RBC Heritage. He tied for third place at the BMW Championship at Wentworth in England at the end of May, which may indicate his game is not as bad as his T49 finish at the Memorial would make it appear.

Zach Johnson (35-1) FedEx Cup Rank: 13 Scoring Average: 70.166 OWGR: No. 14 Zach sits 13th in FedEx Cup points, but most of his success this year came at the beginning of the season, with a win at the Tournament of Champions in Hawaii, and a third-place finish at the Humana Challenge. His best performance in the past month has been a T14 at Wells Fargo. His skill with the wedges, however, might make him a live dark horse at the US Open Championship this year.

Brandt Snedeker (35-1) FedEx Cup Rank: 117 Scoring Average: 71.682 OWGR: No. 33 Many want to know whatever happened to Snedeker. Once considered the best player to have never won a major, his name has given way to players like Matt Kuchar, Jordan Spieth and Keegan Bradley. Even Snedeker himself described his game as “Consistently inconsistent.” He has played 15 events this year, missing the cut three times, and earning only one finish in the top-ten. 35-1 is not a bargain.

Jonas Blixt (35-1) FedEx Cup Rank: 72 Scoring Average: 71.780 OWGR: No. 36 Blixt has missed the cut in five of 14 events in which he has played this year, but his best effort was a tie for runner-up at the Masters. It was also his only top-ten performance this year. If his trend is to play his best golf at the major tournaments, he might be worth a try at long odds. It might, however, be better to wait and see if it actually is a trend.

Martin Kaymer (35-1) FedEx Cup Rank: 24 Scoring Average: 70.598 OWGR: No. 28 If someone is looking for a bargain at 35-1, why not take a chance on the winner of the Players Championship? He has made the cut in 9 of 11 tournaments this year, and has two top-ten finishes and four top-25s. He has a major championship under his belt so he knows how to handle the pressure. He could be a true dark horse in the US Open Championship this year.

Steve Stricker (45-1) FedEx Cup Rank: 134 Scoring Average: N/A OWGR: No. 17 Stricker is an interesting proposition. A year ago he made the decision to spend more time at home and play only in select tournament throughout the year. In fact, he has not played in enough events this year to have an official scoring average on the PGA Tour. Much like Jim Furyk, Stricker has great control of his ball flight. He is also known as one of the best—if not the best—putter on tour. That is a deadly combination for someone who comes in at odds like these.

Angel Cabrera (75-1) FedEx Cup Rank: 174 Scoring Average: 71.634 OWGR: 102 It is always a good idea to put a modest wager on “El Pato” (The Duck) in a major. The Argentine just knows how to play the big tournaments. Never mind that he has missed the cut in eight of his 13 events on the PGA Tour this year. Forget that his best finish is a tie for 30th at Wells Fargo this year. Remember that he has won two major tournaments, and one of them was as a dark horse in the 2007 US Open Championship, staring down the barrel of a determined Tiger Woods for the final 18 holes. He won the Masters in 2009, and when Adam Scott won the Masters in 2013, El Pato was the man Scott had to beat in a playoff. At 75-1, it would be loads of fun if he contends on the final day.