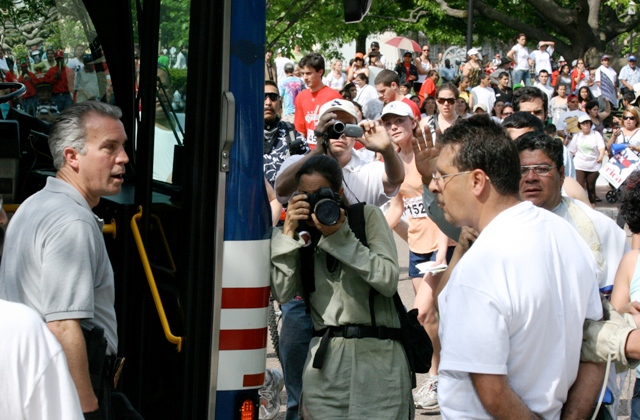 California had top news over the holiday weekend, including a rising issue on immigration, two earthquakes near Coachella Valley, wildfires in Northern and Southern California, and news of a 15-year veteran lifeguard drowning. These reports come after an extended holiday weekend for the U.S.A., which included the celebration of America’s Independence Day.

Tatiana Sanchez and Ricardo Cano of The Desert Sun newspaper reported six people were arrested in Murrieta. Protesters had attempted to block a second round of charter buses carrying mostly illegal immigrant women and children to a federal facility for deportation processing. According to Sanchez and Cano, a woman jumped on a police officer’s back while four others attempted to interfere. Another person was arrested for “disorderly conduct” after crossing yellow tape which was set in place to allow access to the entrance of the border patrol office.

Sanchez and Cano mentioned both protesters and supporters were seen holding posters which stated either, “ILLEGAL is a crime,” or “nation of immigrants.” Supporters made comments such as, “People are taking two presidential terms out on a bunch of 10-year-old kids,” while protesters were reported as saying the protest had nothing to do with race or ethnicity.

Protesters had gathered together in Murrieta to respond to the current issue of child immigrants arriving at the U.S. and Mexico border in Texas. Thousands of children have emigrated from Central America to the U.S. seeking refuge. Due to overload in Texas deportation processing services, these child immigrants have been transported to either Arizona or California for further deportation measures.

According to a report by Charles Babington of The Boston Globe, child immigrants from Central America must be taken into custody and undergo a “deportation hearing” after George W. Bush placed the requirement into law over concerns on human trafficking. Babington reported the Obama administration wants more flexibility on the process, but stated even if Congress would agree, it would do little to ease escalating quarrels over the issue.

Fern Remedi-Brown of Guardian Liberty Voice wrote an opinion piece about how Guatemalan children are fleeing to the U.S. due to violence and poverty. Remedi-Brown stated Guatemala is one of the poorest countries with a Gross Domestic Product (GDP) of less than $2000 per capita, and the country has the fifth highest murder rate. Parents often leave children with grandparents in order to search for work and now children as young as nine and ten years old are fleeing from Guatemala as well. These children search for family members, and refuge from violence, health or welfare problems. Remedi-Brown stated that these are the main reasons Guatemalan children are migrating to the U.S. and Mexico border. This issue of immigrant children illegally crossing the border contributed heavily to California being top in the news over the holiday weekend.

In other news related to California,  two earthquakes took place on Saturday morning near Coachella Valley. Dave Nyczepir of The Desert Sun stated three earthquakes were originally reported, but the U.S. Geological Survey revised the number. The first earthquake measured 4.6 on the Richter scale with a shallow depth of only 5.4 miles. The second earthquake measured 2.7 in magnitude. Rock slides occurred, but no reports of injuries or damage to property took place. Nyczepir added that 15 aftershocks were reported an hour after the initial earthquake.

Other top news happening in California over the holiday weekend included two wildfires which burned in the northern and southern part of the Golden state. Fox News referred to an AP report, stating one of the wildfires occurred in Napa County and damaged nine structures, including two homes. The fire had started Tuesday, and 200 homes were evacuated in one day. The fire was 65 percent contained on Friday night, with no further threats to structures.

Meanwhile, in Southern California, a fire in Julian was 70 percent contained on Saturday after burning down two homes. The wildfire was reported to have hampered Fourth of July festivities which attract around 3000 to 5000 patrons to this “historic mining town.” There were no reports of injuries, however.

Also in Southern California, a lifeguard drowned trying to save a man’s life. Time Magazine noted this incident happened a day after a 50-year old man and another lifeguard were bitten by a shark off the coast of Manhattan Beach.Veteran lifeguard, Ben Carlson, 32, of Newport Beach,  was assisting a swimmer when a large wave came crashing onto them. The swimmer was able to make it to shore, but Carlson did not. After a three-hour search, Carlson’s body was found and pulled from the water around 8PM, PST.

The Chief of the Fire Department , Scott Poster, said the incident is a tragedy, and the first to happen in the “line of duty.” Poster noted Carlson was a 15-year veteran, but added searchers were dealing with 12 foot waves all day. The National Weather Service agency had issued a report warning of strong rip currents and high surf occurring on Sunday.

Time Magazine also noted a 25-year old man in Los Angeles had to be rescued from the water. With these coastal occurrences, and other major incidences happening, California had some tops news taking place over the extended, holiday weekend.