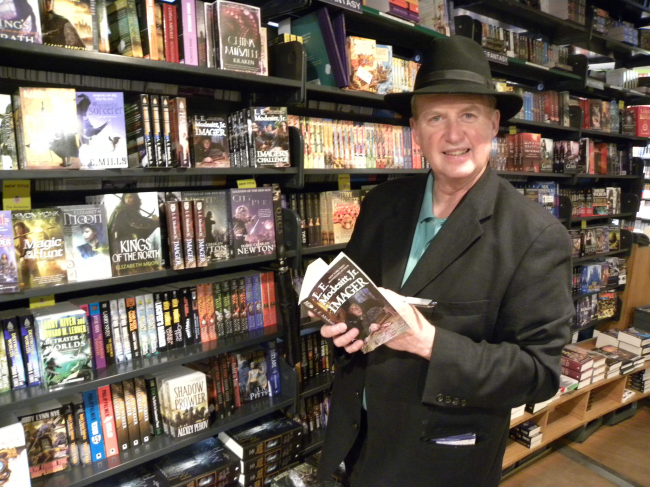 Cyador’s Heirs by L.E. Modesitt Jr. (Tor) is the 17th book in his fantasy series, The Saga of Recluce. The events in the novel take place decades after Cyador’s fall. The survivors, determined to re-establish their empire and way of life elsewhere, have settled in Cigoerne, a section of Hamor. The fertile region of Cigoerne was reclaimed from the near-desert thanks in part to irrigation efforts. Cigoerne’s neighbors, reeling due to an ongoing drought, are jealous and go on raiding missions to try to obtain food and other commodities that Cigoerne has in comparative abundance. 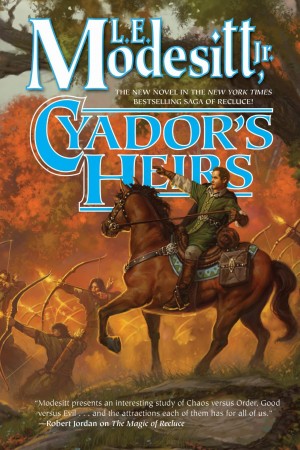 Still, Duke Kiedron is a fairly strict disciplinarian, and does not like certain things he has noticed about Lerial, like Lerial’s tendency to question his authority. He wants his sons to obey him without asking why, while Lerial wants to know the reasons behind why he is asked to do something. Duke Kiedron decides to send Lerial to live with the elderly Majer Altyrn for a year, to learn more about combat and discipline from him, as well as help Altyrn out with the chores he has around his estate and farm, like digging ditches and mucking out the horse stables.

Lerial is at first resentful that he is being sent away. He believes it is even possible that his brother, Lephi, has been instrumental in convincing their father to send Lerial away, so he will be out of sight, out of mind. But Lerial learns a lot of important knowledge while staying at Majer Altyrn’s that will aid him, especially when war begins upon the outer fringes of Cigoerne. Lerial will be forced to call upon both this knowledge, as well as his growing mastery of Chaos and Order magic, in the upcoming war, his journey towards adulthood and becoming the potential heir of Cigoerne.

In other words, Lerial is destined to become a gray mage, one who uses both types of magic. Being a gray mage is almost unheard of when it comes to rulers, but Lerial will discover during the course of his adventures that both types of magic have their uses and both exist in a balance with each other.

Upon returning from his year at Majer Altyrn’s estate, Lerial trains with his mother at a health clinic, strengthening his Order magic skills and getting to know more about the people who he might one day govern through healing them. He is sent to help train a border country of forest people into becoming future Mirror Lancers under Majer Altyrn’s command when they ask Cigoern for assistance. Lerial finds himself a part of an army trying to defend the forest people against a much larger enemy force and numerous Chaos wizards.

The Saga of Recluce series of fantasy novels, including Cyador’s Heirs, follow a basic formula but it is how L.E. Modesitt works within the formula that makes each entry unique for his fans. The books are great reads the first time through and fans of the series are also rewarded by re-reading them. They are almost all about a young man with the ability to manipulate Chaos or Order magic, or both. The importance and potential uses of both Order and Chaos magic are explored in the series, as is the history of Cyador. The young hero of each book learns how to use his gifts and has to call on their abilities under often desperate circumstances in which his own life and the lives of others is at stake.

The time period and setting is different from one book to another. The level of expertise that the hero possesses and what he can do with his knowledge of Order and/or Chaos magic also is different from novel to novel, but in each entry, the hero has to learn how to use his magic to the best of his ability and make the right decision when the chips are down.

Cyador’s Heirs by L.E. Modesitt Jr. showcases the author’s world-building skills at their peak. L.E. Modesitt Jr is a consummate storyteller and he works his magic again in this entry of The Saga of Recluce series. The upcoming novel, Heritage of Cyador, will continue following the fate of Lerial and his growing mastery of both Chaos and Order magic as he strives to become an heir to his father’s duchy of Cigoerne. Fans of The Saga of Recluce series and fantasy novels, in general, will want to add Cyador’s Heirs to their reading lists.