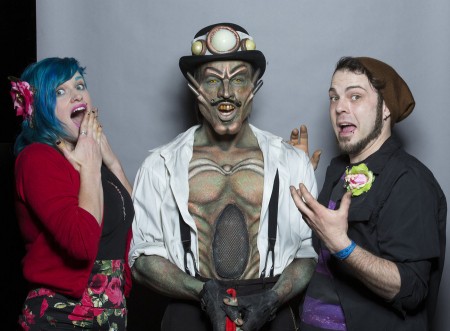 This week’s Face Off had the American gangster as its episode title and theme. In episode two of the reality television makeup competition, the remaining hopefuls got their first chance to work in teams. Each contestant was placed with another member after being brought to New York Street at Universal Studios. This location was where Dick Tracy and The Sting were both filmed as well as many other gangster themed productions.

McKenzie Westmore waited for the contestants by a random selection of props, which all represented a real-life gangster and his “nickname.” She explained the relevance of the location along with the reasons for the choice of props. Referencing Dick Tracy and Frank Miller’s Sin City, she explained how these nicknames for gangsters were instrumental in designing the makeup for the OTT criminals in both films.

After being put into pairs, each Face Off duo picked what prop they wanted to work from. McKenzie then introduced this week’s special guest, and guest judge, Doug Drexler. On a sidenote: Doug, who is an award winning legend in the film business, will be at the Star Trek Convention at Las Vegas this week. Once the introductions were finished, Ms. Westmore informed the new teams that she and her father Michael Westmore, another film business legend, would be back later to see how they were getting on.

On one more sidenote: Michael Westmore will also be at the Star Trek Convention in Las Vegas as an honored guest.

The contestants were all excited about the opportunity for Drexler to see their end results. They were, however, even more excited by their first “one on one” with Michael Westmore. While Mr. Westmore questioned each team, the duo of Sasha and Barry immediately stood out as the team who were going to have problems.

The main problem with team Sasha and Barry is that he got caught up in a rat motif that had nothing to do with the prop that they picked. In this week’s Face Off the American gangster theme caused Barry to get on a James Cagney loop and even after the Mr. Westmore interview, only reluctantly added Sasha’s clock accessory. By adding the piece to the character they created the extra “bit” would reference the nickname and the prop chosen.

Rachel, who was paired with Vince, got worried that they are spending too much time on the minutiae and not casting anything. Dina and Jason had problems getting their mold out, but disaster was just diverted when it did not break, as feared, and only cracked badly.

Team Keaghlan and Damien were very matter-of-factly getting their creation done with no “theatrics” or serious issues. Keaghlan did not even have an “Oh dear,” moment this week. One nice part in the show was when Rachel and Vince had issues getting their mould sorted all the other contestants jumped in to help the pair out.

The clear favorite this week was the team of Cig and George. These two had an infectious enthusiasm that was fun to watch and seeing George try out his teammates fat suit, was amusing as he showed just how excited he was to be doing this challenge. Having said that, Keaghlan, Damien, Gwen and Drew were all “safe” in this spotlight competition and did not have to go through the judge’s questioning.

Face Off with its American gangster theme ended with some very impressive creations from the teams. The winner was Cig with his body suit which made his and George’s character based on Tony “Big Tuna” Accardo look practically perfect. All the judges loved the creation and the winning combination of the fat suit and the makeup made it the clear favorite. Sadly, Barry’s obsession with a “dirty rat” cost him dearly and he was voted off this week. Next week’s competition deals with an alien theme and should continue to entertain fans of movie “special FX” makeup and prosthetics.