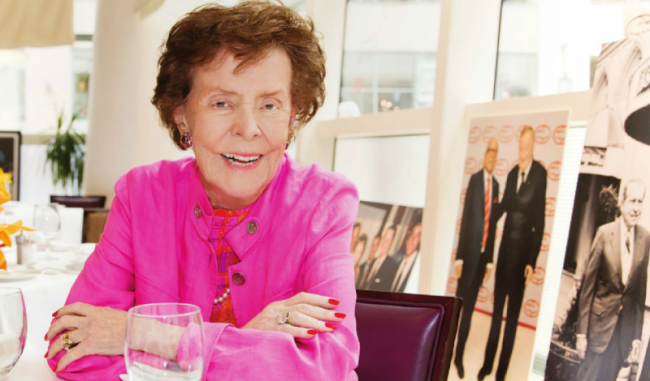 She ran one of the most powerful modeling agencies for nearly 70 years and steered the careers of a number of very famous supermodels. The fashion industry now says goodbye to the Grande Dame of fashion, Ms. Eileen Ford. According to her daughter Katie Ford, the legendary fashion mogul died on Wednesday in a New Jersey hospital at the age of 92 from complications from meningioma and osteoporosis.

Eileen Ford and her husband launched the Ford Modeling Agency back in the late 1940’s and set the beauty standard for models in the fashion world. The model criteria of height and weight proportions was set in stone by Ford and is pretty much still followed today in the world of high fashion. The Ford Agency was responsible for the careers of many top fashion models including Christie Brinkley, Jerry Hall, Lauren Hutton, Cheryl Tiegs and countless others. Ford managed to turn the models she represented into commodities that could command millions dollar contracts and become more popular than the designer clothes they wore.

Eileen Ford had a knack for identifying young women who fit a particular mold that could be cultivated into supermodels. Aside from their physical attributes, models who possessed charismatic qualities were the models who ascended into the stratosphere of supermodel status like Naomi Campbell or would breakout into the acting world like Brooke Shields, Candice Bergen or Jane Fonda. Ford was very protective of her “girls” as they were called, and was very much concerned for their wellbeing as well as their careers. Ford worked to guard her models from the dark and sleazy side of the industry that was notorious for sexual misconduct, drugs and the mistreatment of young, impressionable  and starry-eyed women. Eileen Ford made it her mission to treat her “girls” as if they were her own daughters.

Long before taking the modeling industry by storm, Eileen began her career working as a photographer’s stylist and reporter for a fashion trade paper called The Tobe Report. It was soon afterwards that Ford would begin working as a clerical secretary for a handful of models that would later spin-off into duties as their informal agent. Starting her own agency with her husband Jerry would bring Eileen massive wealth. According to reports, The Ford Agency, would generate revenue that would keep it at the top of the heap for much of the industry throughout the 1970’s and 1980’s, during the height of fashions most lucrative years.  Even as other big modeling agencies would pop up like Elite and The John Casablanca Agency, Ford would maintain its stronghold in the industry. By 2007, Jerry and Eileen would sell the agency to an investment bank and Jerry would die a year later at age 83.

Eileen Ford leaves behind an indelible legacy on the fashion industry and the world of modeling. Today, decades after first opening for business ,the agency is still thriving. The Ford Modeling Agency has bureaus in all of the major fashion centers across the globe. Along with New York and Paris, the company also keeps a roster of models in Los Angeles, Chicago, and Miami.