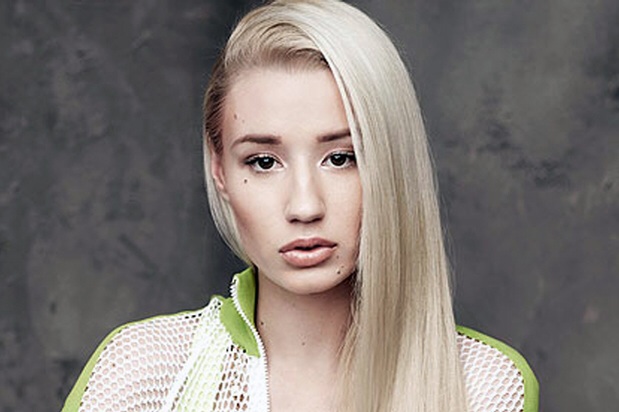 The alleged beef between Iggy Azalea and Nicki Minaj is apparently over. That is of course, if there ever was a feud between the two rappers to begin with. According to Minaj rumors of the drama between the two are false. Nicky Minaj claims the fake beef between her and Iggy Azalea is actually nothing more than media fueled. The stars took to social media to dispel any rumors the public conceived about a possible dispute with the hip hoppers.

Azalea, the 24-year-old up and coming rap star is a native of Australia. Born, Amythest Kelly, the rapper moved to the U.S to pursue her dreams of hip hop stardom at the age of 16. She bounced around the south from Miami to Houston and then Atlanta. In 2012 the blonde bombshell hit the underground mix tape scene. Her notoriety grew and she eventually gained exposure after being a featured model on the cover of XXL, a popular hip hop magazine. Along the way Azalea worked closely with rap superstar, T.I, who served as the executive producer to the vixen’s mix tapes.

“Iggy” also signed a deal with internationally known Wilhelmina model agency. Levi’s jeans dubbed the model, the new face of the company. Azalea has not slowed down since and recently has become a household name. The rising star has made history with the debut of her Billboard number one single Fancy, and her feature credit on singer Ariana Grande’s smash hit, Problem. The songs appeared numbers one and two on the Billboard singles chart in the same week. The legendary Beatles are the only other artists to have accomplished this feat in their first two Billboard entries. Meanwhile, Fancy, has become the longest reigning Billboard number one single for a female rapper in history.

At the 2014 BET Awards last week 7.9 million viewers watched what they believed to be Minaj “throwing shade” at Azalea. The more established Minaj has a slew of Billboard hit singles. However, some critics suggested that the Trinidadian born rapper was attempting to disrespect Azalea. After beating out the newcomer for Best Female Hip Hop Artist, In her acceptance speech Minaj made a point to bring up the fact that she writes her own lyrics to her music. Earlier in the evening during Iggy’s performance of Fancy, Minaj appeared or be mocking her. Since there is still speculation that Iggy does use “ghost writers” for some of her songs, rumors immediately swirled about a Minaj and Azalea beef.

However today, Minaj took to her Twitter account to respond to the chatter. The rapper stated “I’ve congratulated Iggy on the success of Fancy, publicly.” The Pills & Potions artist went on to say that she is proud of Azalea and all the female nominees. Minaj also claimed she will not abandon her beliefs on the importance of artistic integrity with regards to writing one’s own music lyrics. The Grammy nominated rapper claimed that the beef with Azalea was a fake created by the media who “put words” in her mouth in an attempt cause controversy. She also focused her attention on female empowerment in the hip hop community. Minaj paid homage to female hip hop artist Lauryn Hill, and Missy Elliot who helped paved the way for her success.

According to Iggy Azalea the fake beef with her and Nicky Minaj was never an issue, which is why she remains “unbothered,” she also referred to the scandal as “an explosion of pettiness.” After remaining quiet on the issue the chart topper posted a picture of her statement on her Instagram account. Azalea claimed that while she didn’t care about anything negative that happened at the BET Awards but,she felt obligated to put an end to the hysteria. Neither artist mentioned the other in their statements. While the female rappers may not be collaborating any time soon, it does not appear that the incident and its aftermath will be an issue going forward.