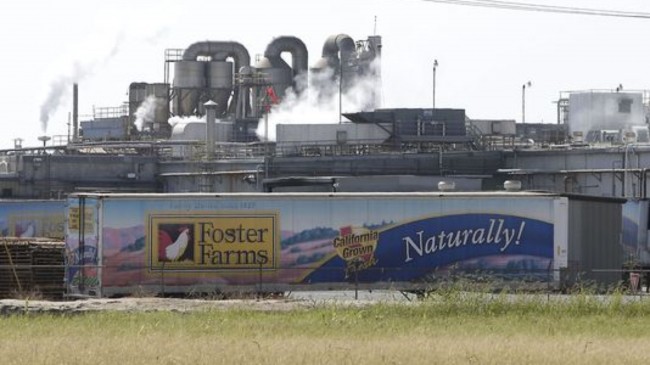 A severe salmonella outbreak motivated California chicken producer Foster Farms to recall the chicken that have been linked to the incident and caused more than 500 people to become very ill for more than a year. Salmonella Heidelberg, a strain of the disease that is resistant to antibiotics, was reportedly discovered Thursday night in Foster Farms’ boneless-skinless chicken breasts by the U.S. Department of Food and Agriculture.

Foster Farms recalled 170 varied chicken products that were distributed from its Fresno facilities in March. The USDA stated that their investigators initially learned of the salmonella case on June 23 and issued a recall as soon as a direct link was established. The identity of the person and location of the case have not been released. 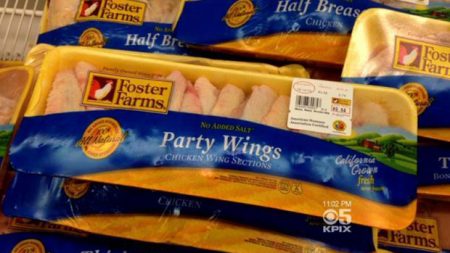 The chicken producer stated that the products have “use or freeze by” dates that begin on March 21 and end on March 29, and that the chicken pieces have been distributed to Hawaii, Arizona, California, Idaho, Nevada, Oregon, Utah and Alaska. The recall includes chicken drumsticks, chicken tenders, thighs, and livers. Although most of the products are sold with the Foster Farms label, some have labels including: Kroger, Savemart, Valbest, Safeway, FoodMaxx, and Sunland. None of the fresh chicken that is currently in grocery stores is at risk.

The USDA mentioned that it was working with Foster Farms to determine the total quantity of chicken affected by the recall. The company stressed the fact that the recall was based on a single case as well as a single product, but that they have issued a broader recall to be extra cautious.

Foster Farms mentioned that their first concern is always for the health and safety of the people who enjoy their products, and that they stand devoted to doing whatever it takes to ensure the safety of the food supply in the United States.

According to the federal Centers for Disease Control, 574 people from 27 states along with Puerto Rico have become ill from the salmonella outbreak, which motivated Foster Farms to recall the contaminated chicken. The outbreak began in 2013 and provoked many food safety advocates to pressure Foster Farms into a recall or even shutting their doors completely.

Seattle attorney Bill Marler, who specializes in food-safety lawsuits, applauded the USDA and Foster Farms for doing the right thing in keeping the food safe for consumption. The law currently allows raw chicken to contain a small amount of salmonella because the disease is often prevalent in poultry and is killed off if it is cooked properly.

Inspectors from the U.S. Department of Food and Agriculture sent a letter to Foster Farms in October of 2013 and had documented fecal material on remains in addition to poor sanitary dressing procedures, product contamination and non sanitary food contact surfaces. The company stated in May of this year that it has set new policies in place, which includes a tighter selection of birds, better sanitation in its production process, and improved health on the farms where the chicken are raised.

The salmonella outbreak that caused so many people to become ill has motivated Foster Farms to recall the chicken linked with creating the epidemic. Now, both consumers and Foster Farm’s distributers can rest easy knowing that there is no more reason to be concerned with the health hazard.