Shia LaBeouf in the Bottle and off to Treatment 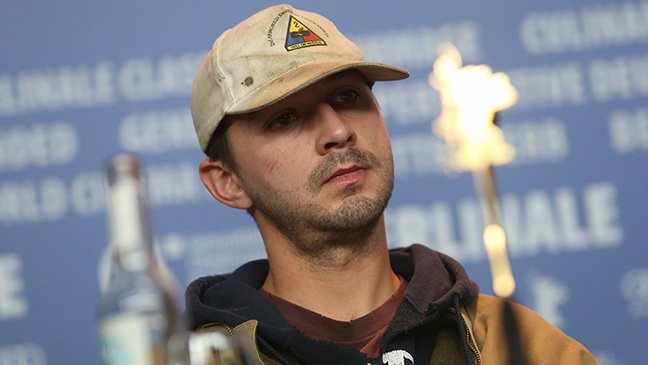 Shia LaBeouf is in the bottle and off to treatment for alcohol addiction.    The famed Transformers actor was arrested in New York last Thursday night after a public bout of really bad behavior.  He was taken into custody with the NYPD and charged with harassment, criminal trespass, and disorderly conduct.  It was first reported that LaBeouf had checked in to a rehab facility, however recent reports note that he is not in a rehab center, but is voluntarily being treated for alcohol addiction.

LaBeouf’s unruly behavior last Thursday actually started with a verbal assault and chase-down of a homeless man in Times Square.   LaBeouf verbally harassed and chased the homeless man, reportedly shouting, and demanding that the man give up his bag of McDonald’s food.

LaBeouf’s off-color day was reportedly spawned by a few drinks at the bar at the Iguana on West 54th St.  At the bar he watched a World Cup match and downed at least four strawberry margaritas. The manager reported that LaBeouf’s conduct was at first above reproach.  He posed with fans, signed autographs and opened the door for a mother with a stroller. However, around 6:20 pm LaBeouf was reportedly chasing a homeless man down the street as he dodged in and out of Times Square’s congested pedestrian traffic.

As Michelle Williams sang I Don’t Care Much, LaBeouf reportedly fell out of his chair which caused a host of other chairs to domino to the floor.   Management of the Studio 54 theater finally decided they had seen enough and summoned authorities.  LaBeouf was taken from the theater in handcuffs during the show’s intermission with the fear that had they tried to remove him during the performance it would cause an even greater disruption.

Part three of LaBeouf’s off-color day ended in his arrest, which did not serve to mute his conduct in the least.  Once in custody LaBeouf reportedly sounded off at the arresting New York police officers.  Spewing profanities, LaBeouf allegedly spit on an officer and yelled, “…do you know who I am!”   He reportedly called one officer a “f*****t”, and told another officer to “suck his d***.”

LaBeouf was taken to the Midtown North Police Precinct.  Once inside of the precinct the 27-year-old former child actor allegedly began to do push-ups, and at one point reportedly told an officer, “I’ll end your life.”   LaBeouf was then put into a holding cell, where he reportedly began rapping “I want to go out – I want to go out!’    He was arraigned that following morning in the presence of a public defender and released on his own recognizance.

LaBeouf has been candid in the past about the role that alcohol has played in his life.  In 2008 he gave an interview to Details magazine and noted that he did not know how to have just one drink.  This revelation certainly lends to his current bout with the bottle and subsequent resolve for alcohol treatment.

LaBeouf has been arrested in the past and noted that he had never been arrested while he was sober.  “I was always arrested drunk,” he admitted.  He noted that when he’s drinking he is unable to recognize the position of his life, and that he did not want to throw away a great  life that he has worked to hard to achieve based on a 20 minute argument with someone.

LaBeouf was born in 1986 and entered the world of performance art as a toddler.  His father Jeffrey was a professional clown and his mother Shayna was a dancer.  He grew up on the Echo Park neighborhood of Los Angeles.  LaBeouf’s father also suffered from substance abuse issues.

LaBeouf got his big break with a lead role in the Disney series Even Stevens.  He rose to A-List stardom as Sam Witwicky in the hit film franchise Transformers. He later garnered a role working with Steven Spielberg in the hit thriller Eagle Eye.  LaBeouf’s resolve to get treatment for alcohol addiction may keep him out of the bottle and keep his career in tact.