Treehouse Construction Continues to Take a ‘Bough’ Among Kids and Adults 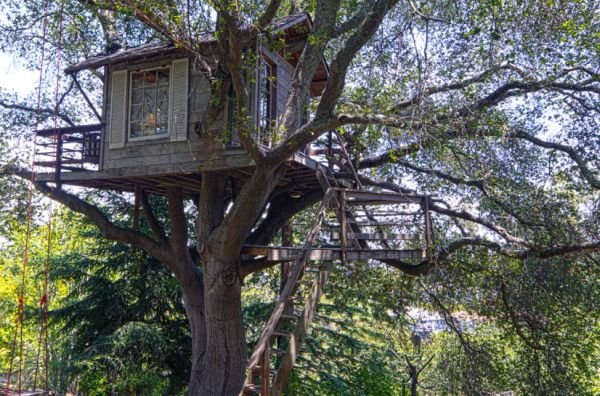 Treehouse construction is up across the country, continuing to take a “bough” as a favorite place among kids and adults to climb up when things are looking down. In fact, beyond the old oak tree shelter in a backyard, treehouses have been sewn into the fabric of nearly every generation in history, from ancient jungle shelters to ornate retreats where tourists can sip a glass of wine.

While it is true that some of the most famous treehouses in history have been created in works of fiction, as Johann David Wyss’ The Swiss Family Robinson or J.M. Barries’ famous Peter Pan in Kensington Gardens, the business of treehouses is also as real as the New York Stock Exchange or the paintings of Van Gogh. In fact, in recent years, the real-life industry of treehouse construction is on the upswing, adding to the long and significant place treehouses occupy in the non-fiction world.

According to Smithsonian Magazine writer, Suki Casanave, tree structures can easily be traced back thousands of years. Natives of the South Pacific and Southeast Asia most likely were the original tree house dwellers. These ancient treehouses were perfect for keeping families safe during the night while jaguars or tigers prowled for food. These ancient tree houses also kept food supplies safe from scavengers while at the same time providing a vantage point for keeping a sharp eye out for invaders. These elevated jungle canopied homes used inventive rope systems that acted like elevators, allowing people to come and go by way of thatched baskets that were raised and lowered down the tree trunk. In the Middle Ages, monks built rudimentary tree-rooms where they could meditate. In more modern times, several well-known people have built tree houses, including Queen Elizabeth, Winston Churchill, John Lennon, and George Lucas.

“From the Middle Ages on, treehouses have a long history,” said Casanave. “Today, treehouses are branching out.”

In fact, tree houses today are making a legitimate resurgence, with more and more adults building arboreal hideaways. According to Casanave, there has been a surge in best-selling books, seminars, and even exhibitions that showcase the eternal tree house design. There is even a National Treehouse Association that hosts an annual convention that features workshops, business ideas, and architectural blueprints for swank tree house designs. 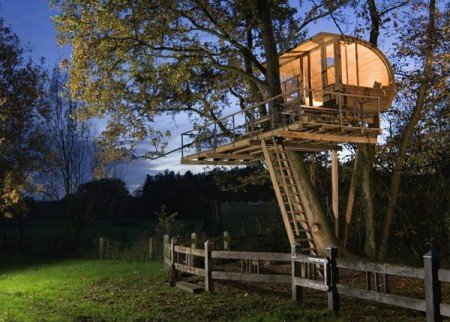 According to the New York Post, one new housing development in the Hudson Valley of New York is even offering a treehouse as part of the deal when purchasing a new home. The price for the add-on amenity, according to New York Post reporter, Kate Briquelet, is a cool $40,000. Briquelet explained that while she was not a fan of the idea, the more than 130-acre development has caught the eyes of numerous New York buyers, reinforcing the increasing trend of treehouse construction taking a bough among kids and adults.

Indeed, the treehouse industry is on the upswing, according to the USA Today. As part of a business strategy to help him survive the downturn in home building, one man even successfully converted his full time construction business into a full time tree house construction company. USA Today reporter, Arnie Cooper explained that the company, called Nelson Treehouse and Supply, is doing a gangbuster business. Owned by a former homebuilder Pete Nelson, the company has built a niche in the otherwise slumping construction industry. According to Cooper, Nelson is now considered to be an authority on treehouse construction, and even authored a best-selling book, Treehouses: The Art and Craft of Living Out on a Limb.

“For 15 years Nelson has built hundreds of tree houses more than half the country’s states and in nine countries,” said Cooper. “How many people can turn their childhood dream into a lucrative business idea.”

Even television has found an upbeat note in the world of treehouses. According to New York Times writer, Steven Kurutz, the Discovery Channel’s Animal Planet recently completed an eight-episode series on how people who have constructed canopied hideaways. Some of the episodes, explained Kurutz, will feature treehouses that are used as lofty living rooms and weekend retreats, while other episodes will reveal tree houses that are used as offices, and some as full-time residences.

“The program will remind viewers of the primordial magic of treehouses,” said Kurutz.

Indeed, the magic and memories surrounding treehouses are almost universal to humans. Regardless of whether people are talking about an expensive addition, to a hillside estate, or a simple extension to an old oak tree, treehouses will always be a cool place to climb up to when things are looking down, and treehouse construction continues to take a bough among kids and adults alike.