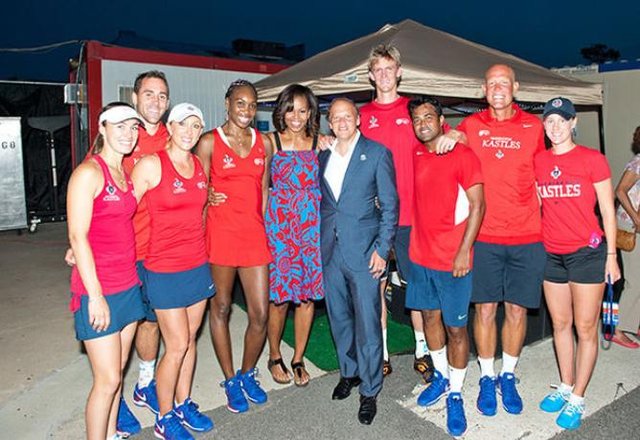 The Washington Kastles played their home opener yesterday in a new home, George Washington University’s Smith Center Tennis facility. The Kastles have established themselves as D.C favorites, thanks to their longest wins streak in professional sports history. Often, celebrities roll in to catch some scintillating Kastles tennis action, including the likes of First Lady Michelle Obama. The Kastles retained all their 2013 players this season and added American rising star Sloane Stephens to their roster that features tennis legends Martina Hingis, Venus Williams, and Kastles Captain Leander Paes. The Kastles are on a winning streak that stands at 15 after yesterday’s opener win against Eastern Conference foe Boston Lobsters.

The Washington Kastles home game was louder than ever with the Smith Center move. The visitors had to cope with more rowdy fans and the insane indoor atmosphere, along with the deep and talented roster owner Mark Ein put together in Washington, D.C. Coached by WTT three-time Coach of the Year winner and former American Professional tennis player Murphy Jensen, the Kastles are the team to beat in World Team Tennis.

For those who have not followed the Washington Kastles yet, it is about time. The WTT format is a very interesting one, as it tests the teams in all tennis formats: Men’s Singles and Doubles, Women’s Singles and Doubles, as well as Mixed Doubles. The first team to five games win each format and so every single point is played like it is the last. The World Team Tennis format was invented by American tennis legend Billie Jean King and the WTT winners trophy is named after her.

D.C’s Foggy Bottom crowd will be entertained to some high-class tennis action this July.

The Washington Kastles were the clear favorites in this match-up, as they had an undefeated record against the visiting Boston Lobsters of 11-0 coming into last night. They also defeated them in Boston this season to open their 2014 World Team Tennis tournament. The Boston Lobsters faced an uphill task from the start against legends Hingis and Paes in the Mixed Doubles format, in which the Kastles pair is undefeated in eight outings overall. They made it 9-0 with a convincing win yesterday. The Kastles dominance was continued by multiple grand slam winner Martina Hingis in Women’s Singles with the blanking of her opponent. World No. 17 Kevin Anderson took care of business against fellow South African compatriot Rik De Voest in Men’s singles. Boston could not match the Women’s Doubles challenge from Hingis and seasoned veteran Anastasia Rodionova. Strong pair of Doubles legend Leander Paes and Kastles closer Bobby Reynolds had to grit out a tie break win in the final Men’s Doubles Event. The Kastles won it 25-8, equaling its largest win in World Team Tennis.

The Washington Kastles organization really stands out off the court too. They play a charity event every year to better the lives of the local community among other contributions. Yesterday, few Kastles players participated in the Let’s Read, Let’s Move program at the Smithsonian American Indian museum. So, get ready for the tennis fever Washington, D.C. As always, expect top-notch tennis from the Washington Kastles this season and as the Kastles slogan goes, they “Refuse To Lose!”