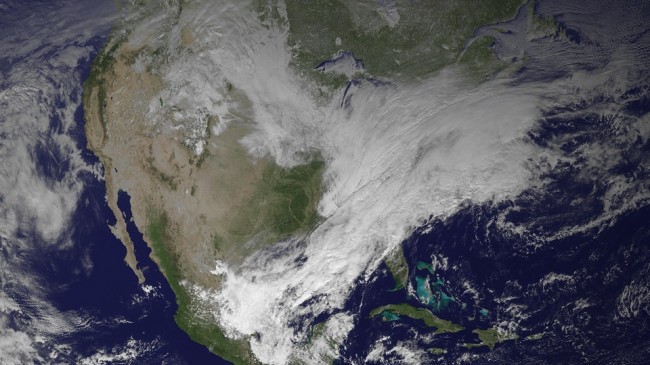 Though it is summertime in the USA, the weather is bringing an unusual cold front to the northeast area of the nation. Reports of the cold front bearing a strong resemblance to last winter’s polar vortex is surfacing as a dip in temperatures may be felt next week as far south as Texas.

According to Alan Boyle of NBC News, a flashback of cold air from the winter could cause the people in the Midwest to see morning temperatures in the 50 degrees range. The Weather Channel is stating the mass of cold air could set seasonal record temperatures. That is because the jet stream is heading more south than usual, and according to Boyle, it bears a strong resemblance to the likes of the polar vortex from last winter. Though Jeff Masters of Weather Underground states it is actually due to Typhoon Neoguri, the cold front will also cause the western part of the US to heat up.

Although the weather is bringing an unusual cold front for summertime in the U.S., the National Weather Service (NWS) reported it is not due to another polar vortex. In fact, NWS was adamant about making sure its forecasters knew not to refer to the chilly air as originating from the past polar vortex, which had caused vicious conditions last winter for the US.

Chris Vaccaro, the director of the NWS Public Affairs Department emailed local offices from the Central Region and ordered them to stop referring to the cold front as part of the polar vortex. Vaccaro stated that in doing so, the forecasters had insinuated various definitions and “perceived impacts” related to the polar vortex. Even the Weather Channel stated it was avoiding the term since it implies a different description other than the “polar air invasion” that is reported to occur next week.

According to Jason Samenow of The Washington Post, The American Meteorological Society defines the official interpretation of the polar vortex phenomenon as a mid to high latitude, planetary scale “circumpolar cyclonic circulation.” It also includes the description of where it occurs in altitude, which is the middle part of the troposphere and up into the stratosphere. Vortex centers are also stated by geographical location, and thermal winds are recognized as producing westerly flows above the “polar frontal zone of middle and sub polar latitudes.”

In contrast, next week’s brush of cold air in the US does not originate from polar latitudes, but from the Northeast Pacific. Although some newscasters, such as Mark Torregrossa of Michigan Live still refer to the cold front as a “piece of the polar vortex,” Torregrossa notes temperatures associated with it may simply dip by about 15 to 20 degrees in places like Michigan.

Torregossa reported Michigan may see low morning temperatures between 45 to 50 degrees for this unusual weather that is bringing an unusual cold front to the states for the summertime, but also advises that frost should not appear. He stated waterspouts may show up over the Great Lakes due to cold air hanging above warm waters which causes these waterspouts to form. Though fun to watch, Torregossa stated the waterspouts can be quite dangerous for anyone on the water.