What Wonder Woman, played by Gal Gadot, will look like in the upcoming movie Batman vs. Superman: Dawn of Justice was revealed this Saturday to attendees at the Comic-Con in San Diego, California. Film director Zack Snyder gave them a tantalizing glimpse of what Amazon Princess will look like. One word that would describe her appearance is fierce.

When the visage of Batman (Ben Affleck) was revealed by Snyder, people tweeting and commenting about it on social media sites started referring to it as the “Sad Batman” look. He could also be described as looking stern or fierce, instead. One thing for sure is that this movie will not be a bright and cheerful one. That is actually good news for fans who were crossing their fingers that it would not be turned into a version of the cartoon “Super Friends” starring real actors.

In the photo that Snyder tweeted out of Wonder Woman, her costume is dimly lit, but looks far from being cheerful or bright. She is wearing thigh-high boots though she still retains her tiara and gauntlets. Her fierceness is reinforced by the fact that she is wielding a sword and has her Lasso of Truth at her side, ready to use if the occasion warrants it. 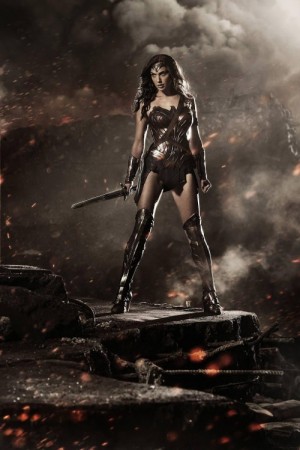 The panel at Comic-Con in the huge Hall H, composed of Ben Affleck, Henry Cavill, Gal Gadot and Zack Snyder, also rewarded the 6,500 attendees gathered to learn more about Batman vs. Superman: Dawn of Justice with a short video clip from the movie. The video showed a heavily armored Batman on a rooftop possibly attempting to lure Superman (played by Henry Cavill) by shining the Bat Signal into the clouds above Gotham City. The eyes of both the Caped Crusader and Supes appear like they are glowing and as if they are angry at each other. Superman looks down towards Batman, apparently getting ready to use his heat vision.

Batman vs. Superman: Dawn of Justice, the sequel to Snyder’s film Man of Steel, will hit theaters May 6, 2016. Besides being a sequel to Man of Steel and building more on the background and crime-fighting activities of Superman and his alter-ego Clark Kent, the movie is also one about the origins of the Justice League of America.

Many fans expressed their dislike of Zack Snyder’s casting choices, especially casting Ben Affleck to be Batman. Some fans were also not pleased with the casting of Gal Gadot as Wonder Woman or Jesse Eisenberg as Lex Luther, but there still has been a lot of anticipation building for this movie. Expectations have also been growing. If Snyder can manage to fulfill the expectations and come out with a movie that blows fans away, all of the criticisms will rapidly be forgotten.

According to Snyder, everything is “going amazingly well” from the talent to the sets to the special effects. He told the crowd at Comic-Con that he had flown in to Sand Diego straight from having been on the set for Batman vs. Superman: Dawn of Justice.

After Snyder showed the video clip, Henry Cavill, Gal Gadot and Ben Affleck came onto the stage. That was when Zack tweet out the photo of Gal Gadot as Wonder Woman. The audience was able to see her image on large screens that surrounded them. The appearance of the actors, who stayed silent during the short time they were on the stage, provoked loud cheers from the audience.

By the photo of Gal Gadot as Wonder Woman that Zack Snyder tweeted out of Hall H at Comic-Con, it looks like she will not resemble Lynda Carter’s TV version of a red, white and blue-costumed Amazonian Princess. Her version will be more fierce and warrior-like. Batman vs. Superman: Dawn of Justice, which will hit theaters on May 6, 2015, is shaping up to be a dark and gritty movie that could become a huge blockbuster.