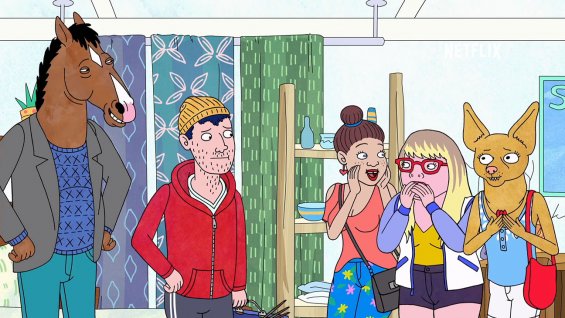 Aaron Paul (Breaking Bad) is back on TV in Bojack Horseman, the newest Netflix animated adult-oriented cartoon that the media company is streaming live to its subscribers. Each episode is 30-minutes long. The show is very funny, but it does contain profanity and some adult topics and situations, so it is not meant for a younger audience.

Aaron Paul plays Todd Chavez, who is the best friend of Bojack Horseman, who is played by Will Arnett, of Arrested Development. Bojack is an anthromorphic horse. Todd is one of the only actual humans in the series. Like his character in Breaking Bad, Jesse Pinkman, Todd has had a few interactions and run-ins with drug kingpins. Todd told Bojack Horseman that he lived “an alternative lifestyle.” Bojack interpreted this as meaning that Todd was gay, saying in the first episode “I didn’t know that you were just lazy.”

Chavez moved in with Bojack Horseman and he basically freeloads off of the horse, who once was the star of a 1990s sitcom, Horsin’ Around, in which he had adopted three human children. The show was very successful, enabling Bojack to buy a house in the Hollywood Hills. However, he has not had a successful show ever since then. He has taken to drinking booze and incorporating a lot of sardonic and humorous remarks into his social interactions, somewhat like…hmm…Will Arnett speaks like in most of the TV shows and movies he has acted in.

Bojack Horseman would like to be offered a role in another sitcom, but he also has plans to write his autobiography. Penguin Books signs him, a publishing company that is ran by an actual penguin, naturally. The penguin is hoping that Horseman’s book will make the company profitable once again, but he is not happy when Bojack delays and delays even starting to write the autobiography. Finally, the penguin suggests that Bojack should work with a ghostwriter, Diane Nguyen, who is played by Alison Brie (Community, The Lego Movie) who will do the actual writing.

Besides Bojack Horseman and Aaron Paul, the third main animated character, Princess Carolyn, is played by Amy Sedaris, who was Candy in the humorous but very twisted TV series Strangers With Candy. It also starred Steven Colbert (The Colbert Report) as one of Candy’s teachers in high school. She is both the erstwhile love interest of Bojack and his agent. Princess Carolyn would like to have a baby with Bojack, but the horse is not ready to take their relationship to that level.

Todd Chavez always wants an excuse to throw a party at Bojack’s house at the horse’s expense. Bojack fills up on cotton candy from a cotton candy machine Todd gets and then he ends up vomiting the pink candy when he has eaten too much of it. One party that Chavez throws in the first episode is for the daughter of a drug kingpin, who threatens to kill him earlier in the episode if he does not throw a party. Bojack wonders why there are so many teenage Hispanic girls there, asking Chavez if the party is a “quinceañera.” Todd denies it, but that is exactly what the party is — one thrown to celebrate the 15th birthday of the drug lord’s daughter.

Aaron Paul also plays a rooster who is dressed in a jogging suit. It is a more minor, though still funny, character. The rooster runs around the neighborhood at the break of day and, rather than crowing, he yells for everyone to wake up.

The creator of Bojack Horseman is Raphael Bob-Waksberg. He liked the animal drawings of a friend of his, Lisa Hanawalt, so much that he developed an animated series around them. Rather than doing a cartoon about happy, care-free characters, he thought he would do one about a depressed one. But, it is quite a funny animated series, despite Bojack’s downturn of fortune and his less-than-ideal childhood, which he is at first reluctant to talk about with the ghostwriter of his autobiography.

The entire first season of Bojack Horseman, starring Will Arnett, Amy Sedaris and Aaron Paul, can be seen in its entirety on Netflix. It is a show that definitely warrants binge watching, though its humor is somewhat dark and twisted and is intended for a mature audience. Check out the video trailer from Bojack Horseman below!