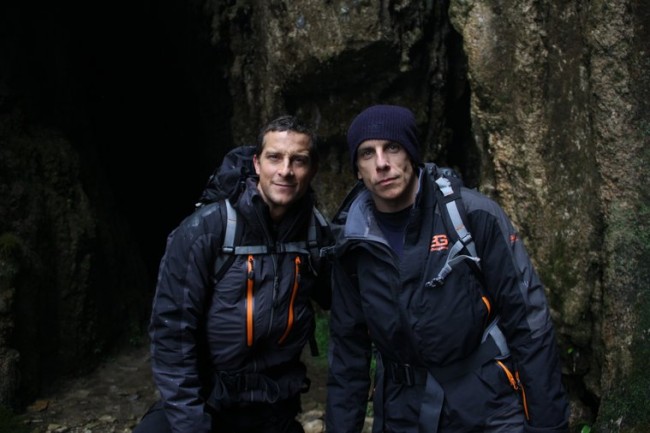 On Running Wild With Bear Grylls tonight, adventurer and survivalist Bear Grylls takes comedian Ben Stiller to the Isle of Skye in Northern Scotland for a 48-hour adventure of a lifetime. Ben Stiller will be, like Zac Efron in the premiere episode, last week, rappelling off of the side of cliffs, though probably not shirtless.

This episode of Running Wild With Bear Grylls started off with Bear and Ben Stiller getting ready to embark on a helicopter journey to the Isle of Skye. Ben is at a whisky distillery waiting for Bear Grylls to arrive. Bear shakes his hand, and then they both stand on the pontoons of the helicopter as it takes off. They both ride away like that.

“I’m starting to understand why I had to sign all of those releases,” Stiller says as he and Bear cling to the side of a helicopter, in a thick fog.

Bear asks him “So, have you done much camping?”

“I’ve never gone camping a day in my life,” Ben Stiller answers him.

“We are literally in a cloud, and it’s cold and wet,” Ben says. The fog is very thick as the ascend a wet and slippery mountain side. It is, indeed, a “place where men go to die,” sometimes, as Grylls puts it.

“Do you really trust that rock?” Ben asks Bear, after Bear has a rope anchored to a rock. He says to the camera “The first three times he put it in there, it kept coming off.” But, Stiller is impressed by Bear’s confidence and he also does not have much of a choice, as he is with Grylls for the long haul. There are 14 miles to go until they make their way to their extraction point.

Stiller is not about to wimp out. Though he has never gone camping, he is physically fit. He just does not seem totally sure that Bear Grylls knows what he is doing.

“I’m actually shaking, This is actually dangerous,” Ben Stiller says, as he climbs up a cliff side. They come across deer antlers and Ben Stiller wants to take them with him in his backpack. He suggest that Bear wear them, “in some kind of pagan ritual.” 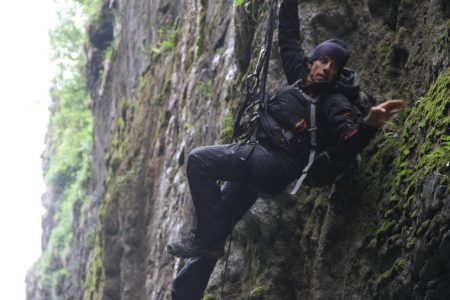 Bear interviews Ben as they pause for a rest. Bear asks him where he grew up. Ben says “New York,” and he goes on to tell Bear about his parents, who are comedians, also. He tells Bear about his comedic inspirations, like Bill Murray in Caddyshack and Steve Martin.

Bear suggests using the antlers, jammed into a crack in some rocks, as they lower themselves down a rope. Bear says he is “not sure if that would be approved by the Scottish Mountaineering Council, but it worked.”

Ben is uncomfortable about rappelling down to where there is the ocean below. Bear asks him to tie the knots they will both be using to rappel down the cliff side with, which also does not do much to put Stiller at ease. Bear tells him how to tie the knots, though — right before Running Wild With Bear Grylls goes to a commercial break.

They descend, with Ben saying “This wasn’t in the pitch that you gave me.”

“The one where you said everything would be fine and cool. This is insane!” Ben Stiller answered. He told the camera when they got to the bottom “This was let’s just throw you off the cliff.”

They locate some limpids and have to pry them off the sides of the cliffs. “I don’t think I want to get too many,” Ben says “because Bear will make us eat whatever we catch.”

“I only got about four. I think it was slim pickings. Not the right season for limpids,” Ben tells Bear.

“I was hoping for maybe forty,” Bear says. Stiller might have been able to get about that many, but he is not about to let Grylls know that.

“I think Bear is eating a lot of different things. We don’t know how it’s been affecting his brain chemistry,” Ben says to the camera. He mentions that he might have eaten some psychedelic mushrooms before.

They find a cave to spend the night in. “Is there anything that lives in the caves?” Ben asks.

“Have you been in this cave before?” Stiller asks.

“No,” Bear answers. Ben Stiller is amazed at the stalactites and stalagmites they see.

“I love finding these sorts of places,” Grylls says.

They drink some of the water in a stream there. Bear assures him it is clean and filtered. “Maybe we could start our own water brand,” Ben suggests. He says that the label could have a picture of Bear Grylls on it, with his face dirty.

They have wild garlic, firewood and a place to spend the night now. Stiller jokes that he “has never had limpids with garlic before, just by themselves.”

Ben uses fire-steel and starts the fire. Ben asks Bear if he has ever tasted a limpid before. Bear tells him he is not going to lie to him, that they are not very good.

“It’s nice, with the sand. It’s a bit chewy and grimy, but it could have been worse,” Ben stiller says.

Again, Bear talks to Ben and interviews him a bit. Ben tells Bear that he did not like attention being taken away from him when he was a boy when people wanted to stop his parents and talk to them on the street.

In the dark, Ben whispers that he is thinking of leaving, “so I won’t have to eat any more limpids.”

Bear tells him “Shut up and go to sleep.”

On Day 2, in the morning, Bear asks Ben how he is doing.

“I think I could do this entirely on my own now,” Ben jokes. They have a fire going. They have to now climb straight up the side of a cliff.

“This is classic commando — Grylls begins.

“But, I’m not a commando. I appreciate your confidence in me,” Stiller interrupts. Bear shows him the technique to use, saying “I’ll be right behind you.

“How are you feeling, Ben?” Bear asks as they are about half-way up.

“A little bit tired,” Ben answers. “This is crazy. This is hard.”

“You can do it,” Bear encourages him.

“I honestly think I’m going to pass out,” Ben Stiller answers, then he suddenly is dangling from the cliff side, as if he has passed out. Running Wild With Bear Grylls goes to another commercial break.

“You’re exhausted, but that’s part of it,” Bear says when Running With Bear Grylls comes back from the break. Ben has not passed out, but he is very tired. “You’re doing excellent, Ben,” Bear tells him, as he recommences climbing up the side of the cliff. They both make it to the top, though Ben is exhausted.

“He never threw the towel in — he kept on moving. And, that’s what I respect,” Bear says to the camera.

They now just have to get around a place on a cliff side that is very slippery and they will be at the extraction point. Of course, jumping into the ocean is going to be involved.

“Never with you,” Ben says.

Bear sends up an orange smoke signal. They both throw their backpacks into the ocean. “Jump where I jump, okay?” Bear says. They are fairly high up. Bear jumps, then says “One, two, three–” and Ben jumps off, also.

“Bear’s idea of what pain is is different from that of most people. It was incredible; it was epic,” he says. Ben pulls himself out of the ocean and boards a seaplane.

“He’s genuine, he’s kind. And, underneath it all, he has a streak of steel,” Bear says about Ben Stiller.

Next Monday, on Running Wild With Bear Grylls, Channing Tatum will be the celebrity that Bear Grylls takes out into the wilds. It is sure to be another great episode.

This week, Bear Grylls took Ben Stiller to the Isle of Skye in Northern Scotland, where the British Air Force trains. Stiller was definitely out of his comfort zone but he stuck it out and used his sense of humor, along with survival skills that Bear Grylls taught him, to make it through the 48-hour adventure of his lifetime. Though Ben might have, at times, though about quitting, he kept on going. Ben Stiller is both one of the premier comedians of today and a likable guy with guts and perseverance.