Being Politically Correct Is the Thing to Do 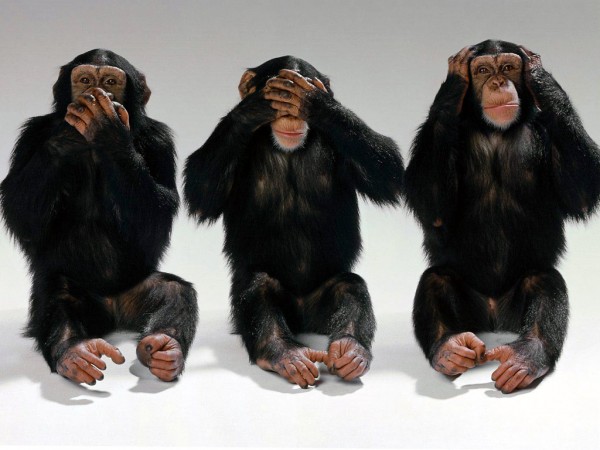 Freedom of speech and individual thinking is becoming a thing of the past. Over-stepping one’s bounds with new ideas and insights seems to sift through the channels of authority, censorship and political correctness. Having an opinion is now often dictated by what will people think, do, or how will they respond. Any twinge of being out of line in the politically correct world often results in thoughts and actions being squelched in an effort to save face. Being politically correct is the thing to do in today’s world.

Describing an actual event or circumstance must involve the chosen words that have been deemed appropriate. If going beyond the bounds of free thinking, one can find themselves as an outcast very quickly. The old adage of

is depicted in the photo above, but is out of order, causing many critics to notice and focus on the small details. Everyone has a story, as everyone else has a comment. The monkey see, monkey do and copycat mentality has slowly erased the freedom we all have strived for.

Discerning truth in a political correct world has yielded to many new phrases along the way. Speaking one’s heart with conviction is now found to be silly talk and will not win any prizes. Each utterance in a public forum must be carefully aligned to the constraints that society has placed. Doing the right thing and speaking correctly is of high esteem, especially amongst journalists and orators.

A slip of the tongue or a mishap in information can land a commentator in hot water, not fashioned to their own beliefs or what they want to convey. We must all obey the laws, rules and regulations of the land and now we must all concede to the type of language that is acceptable.

Citing examples of recent history, much has changed in the way we can speak and write. Contrived witty statements do not go over so well when it comes to sensitive subjects and opposing views. Respect and proper information is what counts. Using illustrations, analogies or funny jokes does not seem to cut it anymore, as politically correct terms are required in all facets of interaction.

Even with great strides over history in equal rights, the human is still striving to fit in with the group and avoid peer pressure. As adults, the high school groups should have been long gone, but the world of business requires a rookie to concede his or her identity in ways that conforms to a mold. Going outside the box is an adventurous endeavor few will succumb to, still pleasing the people around them in every way.

With the advent of cross culturing and intermingling, many people groups have simply given way to the politically correct way of speaking and doing things. Landmark dates dot the history of the U.S. with the Declaration of Independence in 1776, the abolishment of slavery in 1865, Women’s right to vote in 1920 and ongoing Feminism movements. Buzzwords are still needed to succeed when it comes to business practices and existing in today’s society.

Simply saying an unborn baby is just a fetus, instead of a living creature that desires to be part of the world, is almost like reducing human life to the stage of an insect larva. Wishing someone a Happy Holiday instead of saying Merry Christmas is the right thing to do in a politically correct world, but denies the reason for even celebrating. Diversity and all inclusiveness is all the rage, but promotes ignoring the individuality and uniqueness we were created or somehow exist for.

When we were younger, we heard the phrase that meant so much:

Sticks and stones may break my bones, but names will never hurt me….

Just a fantasy of the imagination now, as we all are herded in like cattle between the bars of the fenced in boundries we have adapted to. Still, we must obey the rules and follow orders, lest we be cast away. It is said that all men are created equal. It now reads that all persons are created equal, not based on religion, race, sexual orientation, handicaps, customs or financial circumstance. The list is endless, because we are all different and have various needs and wants.

We have become an accommodating, no questions asked society, where almost anything is acceptable and embraced. It is good on the one hand, but prevents us from really being ourselves in the long run.