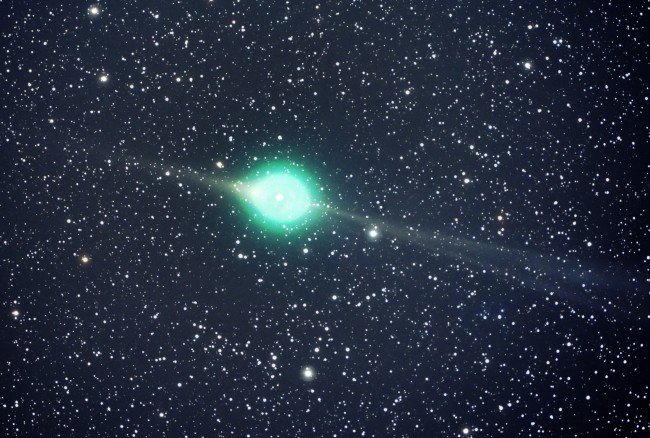 There is big news from space as the European Space Agency’s spacecraft, Rosetta, arrived in the orbit of a comet. This is the first spacecraft mission ever designed and sent to orbit a comet.

The comet is named 67P/Churyumov/Gerasimenko, abbreviated as C-G or Cherry-Gerry. It is two-and-a-half miles wide and appears to have two halves, both a head and a body, that were possibly fused together eons ago. Scientists from the European Space Agency (ESA) have likened it to a “rubber ducky.” They say the neck portion could also have been thinned by a close pass to the sun.

The ESA sent its Rosetta spacecraft to land on the C-G comet over ten years ago. It launched from Europe’s Kourou Spaceport in March 2004 on an Ariane 5G rocket. From Earth, Rosetta passed Mars, orbited Jupiter and passed two asteroids, traveling 500 million miles from the Sun. As the spacecraft entered the cold of deep space, it entered a hibernation mode to protect itself from frigid temperatures.

Rosetta arrived at the comet on Wednesday morning. Due to the vast distance across space from Earth, its arrival took 22 minutes to confirm. The European Space Agency set up a live webcast of the event. After an exhaustive journey, ESA Director General Jean-Jacques Dordain announced, “We are here.”

When Rosetta did arrive, its cameras took never-seen-before photos that unveiled the topography of the comet. Photos revealed plains and mountains, several of which appear similar to the moon. While the comet is made mostly of ice, Rosetta shows that the comet’s surface is covered with a dusty material. Several boulders, many as big as houses, cover the plains areas of the comet, which does a full rotation once every 12.4 hours.

Rosetta will spend the next year and a half descending toward the comet. The spacecraft is currently orbiting the comet at a 60-mile distance. Rosetta carries 11 unique science experiments. In November, it will embark its landing device, Philae, to the surface. Philae carries 10 additional instruments. Dordain looks forward to history in the making. “The discoveries can begin,” he says.

The Rosetta mission comes at a price of $1.75 billion. The goals of the mission are to gain further understanding of how life on Earth began. Astrophysicists believe comets contain the ancient ice and dust left over from the building of the solar system 4.6 billion years ago. Rosetta is the first spacecraft to orbit a comet and Philae will be the first probe to land on one, making this mission one of the most difficult and complex space missions to date.

Philae is expected to land on the southern half of the comet, where conditions appear more stable and solar capabilities are better there for Philae, which is solar operated.  If Philae lands as predicted, the first images will be taken from a comet’s surface. The probe also plans to drill into the surface to determine the composition of the comet.

Looking ahead, senior science adviser for the European Space Agency, Mark McCaughrean, says there is a roller coaster ride yet to come as the Rosetta spacecraft continues to orbit the 67P comet. He likened it to a “scientific Disneyland.”