Into the Storm Predictable Chaos (Review) 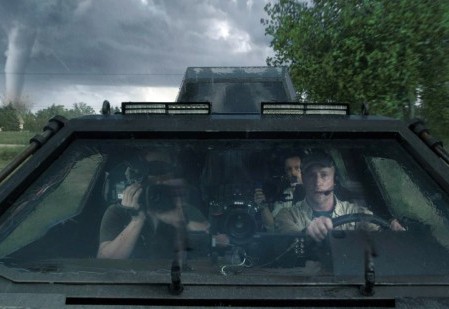 Back in 1996, Helen Hunt and Bill Paxton starred in Twister which had a pretty good storyline and wonderful performances from both actors, in 2014 Into the Storm has a predictable chaos formula that gives “great tornado” but little in the way of performances. This is not the actors’ fault. It is just that the characters in the film are not too deep. Relying upon stereotypical “types” rather than in-depth roles that feel real.

To be fair, it is the storm itself that is the star here. The film does not have a solid storyline, rather it has several threads of plots that interweave fairly well in the movie’s timeline. Director Steven Quale (Final Destination 5) does well with a cast who do the best they can with roles that are walking cliches.

The film was penned by John Swetnam (Evidence, Step Up All In) and it is clear that he chose to focus on the storm activity and only pay lip service to the people caught up in the events of the screenplay. Each of the main players in the film, the school vice principal and his distanced sons; the slightly desperate and egotistical professional storm chaser and his unhappy staff; and the two moronic “hillbilly” YouTube “Jackass” wannabes are all pale, shallow characters.

This lack of character depth is okay though. Into the Storm is about a super storm of epic proportions that brings chaos to the predictable characters in the movie. The audience is more moved by the storm itself, with its great special effects driven damage. Sitting in the theatre, despite the lack of 3D, the audience moved, dodged, and jerked away from the action on the screen.

The idea of multiple tornadoes creating havoc on an unsuspecting community is not a new or far fetched idea. Just type the phrase “multiple tornadoes” into Google search and at least two real instances of this phenomenon show up. However, these numerous cinematic cyclones are of a pumped up, steroidal variety. They have the ability to lift up airliners and fling them about in the air or throw cars, trucks and semi’s around like kindling.

It is this “bigger than life” aspect of the stormy weather that makes the tornadoes the star of the film. The actors would have had little chance of competing against such computer generated excitement. The action flowed well in most cases, except in the middle, where the director attempted to make the audience care about the two-dimensional teenage boy and girl who were in deep trouble.

Had there been any type of deep connection with the audience for these cardboard kids, the viewer would have been on the edge of their seats for this life or death sequence. Unfortunately, this was a time for bums to twitch in seats and complete disinterest in their side of the proceedings. As the teen boy’s father rushes to save his teen son, any time spent away from him fighting this superpowered storm, is boring. Again this is not the performers’ fault.

About the actors, Richard Armitage plays the vice principal father, Gary, Sarah Wayne Callies plays Allison, the meteorological expert who’s left her 5 year-old daughter behind to help storm chaser Pete find his tornado. Pete, played by comic actor Matt Walsh, is fun to watch, but like his fellow characters in the film, is ultimately disappointing in the depth department. The two YouTube wannabes, Donk and Reevis (played by Kyle Davis and Jon Reep respectively) are meant to be comic relief and they fulfil this tasking very well, although the two are a bit intrusive.

Perhaps the most interesting character in the film was Jacob. Not because of any real depth or fascinating reveals in the film, but because he is played by Jeremy Sumpter. If the name sounds familiar, it is because he was Peter Pan in the 2003 film of the same name. The reason his character was so interesting is because he looked annoyingly familiar. At least now the question of what Peter Pan would do if he grew up is answered. He would be a cameraman for a storm chaser.

Despite the amount of negatives in the area of character development this is one heck of an entertaining film. It is the cinematic version of being on a rollercoaster. The action is unrelenting, except for that saggy middle bit, and is guaranteed to keep you tensed up and ready to duck while watching the film.

One thing that the movie does very well is prove that all those tornado drills undertaken by school kids in the U.S. really were as worthless as thought by those participants of said “safety exercises.” Another point made in the movie is that amatuer daredevils who want fame on YouTube are almost invincible.

Into the Storm clearly has made chaos the star and the predictable characters are just pawns to be flung about the countryside as these super tornadoes wreak havoc on the populace. The computer generated special effects are stunning and there are some scenes where the audience is taken right into the tornado. The only question is, why did the filmmakers not opt for 3D and/or IMAX. Still, at the end of the day, this is a real popcorn munching exciting film if one does not go in expecting Hamlet versus cyclones. More of a summer fun film rather than being anything of real substance but worth watching nonetheless. Into the Storm opens in cinemas across the country on August 8, 2014. Prepare to be blown away by the special effects.