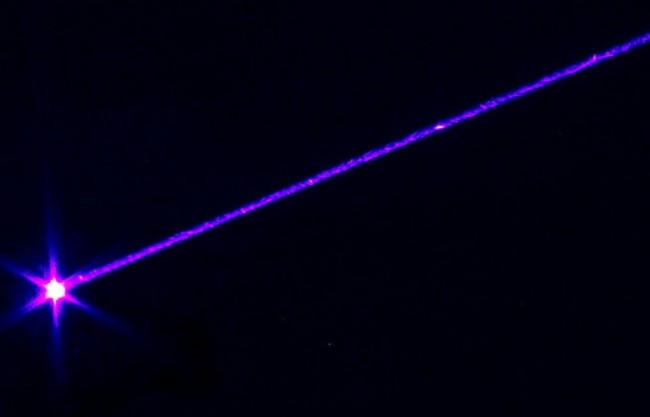 Scientists have developed a laser that can be used to find explosives and drugs from a half mile away. The police and the military will be able to use the laser to safely search for drugs and explosives. The technology is called remote laser technology and it may change the game for law enforcement and keep investigators safe when searching for explosives.

A new study shows that scientists are one step closer to developing a system that can be utilized from a plane and detect chemicals. The study shows that scientists in a plane were able to use a single shot laser to detect chemicals on the ground from just over a half mile away. Vladislav Yakovlev, co-author of the study and biochemical engineer from Texas A&M University, said “This opens up the door to an entirely new method for remote sensing.”

Other studies done in the past have utilized similar systems to detect chemicals, however, according to Yakovlev, “No one has been able to obtain such long distances, and especially not on a single-shot basis.” The new technology is a game changer for law enforcement and is the first of its kind that is able to successfully detect chemicals at these distances.

The technology uses a technology called “Raman scattering.” The technology involves light passing through a specific material, which causes it to vibrate at the level of the molecules in the material. When they hit the material they scatter causing the color of the laser to change as the pulses hit the target. Yakovlev explains that the change in color is specific to the material and therefore scientists can detect the color change and use it to identify the material.

The scientists were able to use the laser to find and differentiate between ammonium nitrate and sodium nitrate, two similar-looking powders that are both used to create explosives. The chemicals were able to be correctly identified from almost a quarter-mile away.

Yakovlev and his team are hoping that the technology can be refined and made affordable for the general public. Currently, the entire system can be assembled for around $30,000. Before the device can be made ready for real-world application the technology will need to be developed so that it can accurately identify chemicals.

The system is relatively safe with the only safety concern being the laser hitting a person’s eyes. The probability of that is slim and can be eliminated by the user wearing goggles. There are many military and non-military applications for the system.

Laser systems developed similar to the one by the scientist from A&M University could help regulators detect fertilizers from the cockpit. Soldiers could use the device to search for explosives and other dangerous chemicals and the device could aid police in detecting drugs by allowing them to scope large areas on the ground from the air. It will give officers the ability to search large areas they would not be able to cover otherwise.

Scientists are excited about the possibilities. They are planning on continuing to develop the system to turn it into a valuable tool for a wide range of applications. In the future, these laser systems may be utilized at airports to quickly scan people for explosives, hazardous devices, illegal drugs and other dangerous substances.

There is even a possibility of the device being used for space missions. Yakovlev stated that the remote sensing system may be utilized in future Mars space missions to probe spots on the ground for life supporting elements. Meaning, in addition to the practical applications of the device like detecting explosives, the laser could be used to find life on other planets.