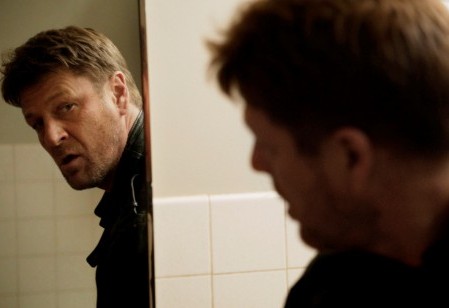 The TNT drama Legends premiered Wednesday, and the good news is that the star of the show, Sean Bean will live. At least according to the network he will survive the series. In this latest offering from the TNT, Bean plays FBI agent Martin Odum who is an undercover specialist. The premiere features Odum infiltrating a U.S. terrorist group – the Citizens Army of Virginia – as Lincoln Dittmann, a man who feels he has nothing to lose who wants to strike against the government.

Odum has a past “romantic” history with his boss/handler Crystal, played by Ali Larter. Bean’s character is “the best” undercover operative in the business and it seems that his ability to get in and out of the role he is playing is becoming blurred. Crystal’s team are concerned when he “becomes” Lincoln while briefing them.

The show’s title refers to the false history created for an undercover agent. During the pilot, Odum notices a man following him and catches the mysterious figure who tells him he is not Martin Odum, that this is just another “legend” and not real at all. The FBI agent asks Bobby, who is member of the legends team to see if he can identify the man who has been following him.

Part of Martin’s “real” life includes an ex-wife and a son. After his cover is nearly blown at the terrorist camp, Odum stops by to visit his offspring and give his ex a check. As he is leaving, she points out that he signed the check using his undercover name, Lincoln Dittmann.

In the TNT premiere of Legends, Sean Bean will at least live in the pilot, and presumably throughout the first season. He plays an agent whose psychological profile states that he is the best undercover agent the FBI has and that he has some issues which disturbs his immediate boss/handler and fellow covert agent Crystal McGuire.

After almost having his cover blown, Odum gets another chance to meet the “founding father.” This second chance shows how the legends team works. The terrorist group have tortured Martin’s “in” (a member of the group named Russell) killing him and leaving the agent unconfirmed. In a tense scene, two members of the group take Odum out to kill him, he keeps in character and tells the men that he has incurable cancer. The team back at the agency build him a legend which matches his story, thus saving his life.

The premise of the show is pretty interesting on its own without adding in the subplot of “who am I” which Bean’s character will be going through in the series. The actor has chops enough to enable him to change accents and, as his undercover self, develop a stutter so the new show will allow the Brit actor to shine.

Ali Larter plays her role with conviction, which is to be expected from this fine actress. Bean, of course plays this multi-level character with a realism that impresses. One nice surprise is seeing Tina Majorino from Napoleon Dynamite and Andre moving into adult roles after so much success as a younger actress.

The premiere of Legends may be a little “low key” but it holds enough promise that hopefully the news that Sean Bean is to live will be questioned as the the series moves on. Already one of the team have been killed to keep Martin Odum’s secret from getting out. The idea of keeping the pilot from being too confusing was a smart move, giving the show a chance to increase the mystery and drama as the season progresses. The show airs on TNT every Tuesday.