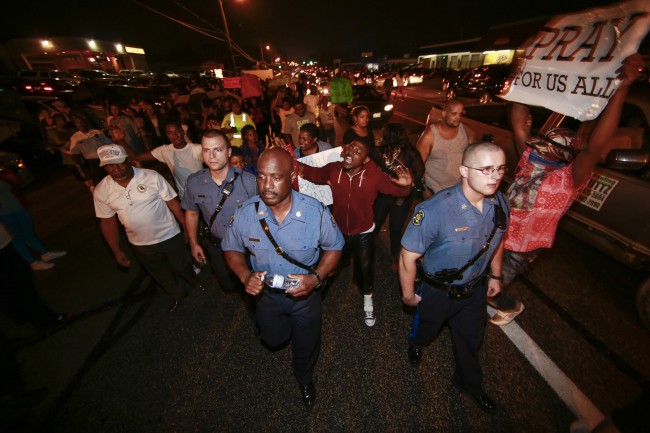 The family of 18-year-old unarmed teenager Michael Brown, who was shot and killed by a police officer in Ferguson, MO on August 9, had a private autopsy performed by forensic pathologist Dr. Michael M. Baden. According to this morning’s press conference, preliminary results of the report cannot determine with any degree of certainty whether eyewitness reports of the shooting that resulted in Brown’s death are accurate. However, Dr. Baden’s report indicates that Brown was shot at least six times, four times in the arm and twice in the head. When questioned, Baden said in the conference that all of the gunshot wounds were survivable except the one to the top of Brown’s head which entered his brain. Baden believes that this was the fatal shot sustained while Brown had his head bent forward. 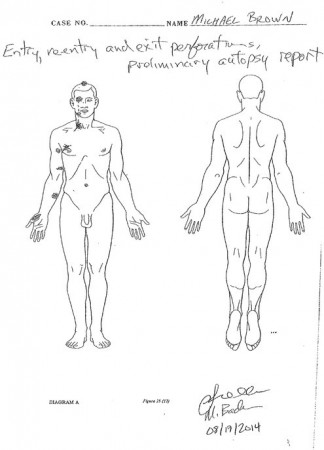 There continues to be much speculation as to the body position Brown was in when he sustained the gunshot wound to the top of his head. Some eyewitnesses have indicated that Brown was on his knees with his hands raised in the act of surrendering, other eyewitnesses have stated that he was “rushing” Ferguson police officer Darren Wilson with his head lowered.

Baden has previously criticized police authorities for not releasing the information as to how many times Brown had been shot. This is a question that was repeatedly asked and according to Baden, the information could have been released “day one.” By not releasing the information, it encouraged the suspicions of citizens that there was a police cover up involved. These suspicions have served to inflame the tension in Ferguson, a situation that needs no further fuel added to what is already a dangerous scene of riots, looting and violence.

Attorney for the Brown family, Ben Crump, stated in the press conference that the private autopsy was performed because the family did not want to rely on, nor did they trust the autopsy performed by St. Louis law enforcement officials. The family feels that these same officials were responsible for the death of Brown and therefore could not be trusted to be unbiased. When the request for the private autopsy was made, the Brown family was not aware that the federal Justice Department had already planned to conduct an independent autopsy early this week.

According to Dr. Michael Baden, the police are the only ones that have the full information about eyewitness testimonies and these will be critical in determining which accounts are more consistent with the forensic evidence. Forensic Assistant Shawn Parcels reiterated however that the two shots to the head and particularly the one to the top of his head indicate Brown was bending forward and it is likely these were the last two shots to occur.

The shooting by a white police officer of unarmed black teenager Michael Brown has been the impetus for tremendous civil unrest in Ferguson, MO. In fact, there has only been one night of “peace” since the shooting on August 9. In response to the continued violence Sunday night, which included shots being fired from the crowd and the tossing of Molotov Cocktails towards police authorities, Governor of Missouri Jay Nixon has called in the National Guard. Some have recommended that the curfew that was put in place by local authorities be pushed up to 10:00 p.m. instead of midnight to give authorities more time to implement crowd control measures in an attempt to keep residents safe and prevent further looting of local businesses.

The results of the private autopsy conducted by Dr. Baden are only preliminary and there are still toxicology questions as well as gunpowder residue questions to be answered. Gunpowder residue evidence should serve to illuminate the issue of whether or not the shots that killed Brown were fired at close range. However, whether Brown was in a kneeling position of surrender with his head bowed, or was actually “rushing” the police officer who fatally shot him, based on the private autopsy results, it does appear that Michael Brown died from a fatal shot to the head while he was bent forward.