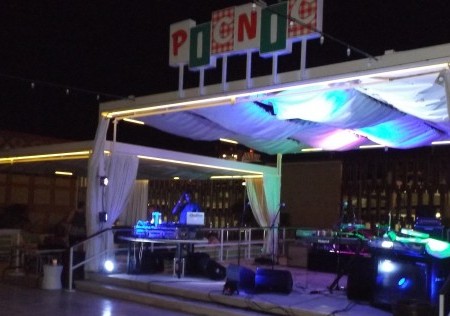 On August 30, 2014 the second annual Rooftop Bikini Beer Festival at the Downtown Grand kicked off at 7 p.m. – for VIP guests and 8 p.m. for non-VIP’s – and lasted “officially” until 11 p.m. and it was great fun for all who attended. After the beer festival ended, there was an “after party” that featured a host of different DJ’s to help things move along at a harmonious pace.

The festival itself was held at the rooftop Picnic Pool and Club. As guests make their way up to this popular area, the first thing they saw were the lights surrounding the rooftop pool and immediately visible to the right, just before the Fremont signs, they could see the “Las Vegas Hogs & Heifers Saloon” sign.

As the guests entered the poolside club they were given plastic cups and sent on their merry way, which got definitely merrier as the night wore on. Apart from the many different beers on offer, special beverages that were crafted and not a part of the major brewers, there were also drinks that were not “hop oriented.”

Dirty tequila, alcoholic ginger beer, a coconut water margarita, the perfect bloody Mary mixer and proper ale were also available to sample. As were different bits of specially flavored jerky and peanuts. This party was not all about the beer, booze and nibbles though. There were two live bands and a number of DJ’s although ParaDice opened the evening and and played in between the two bands’ sets.

Since there is a pool at the Downtown Grand where the festival took place swimsuits were, according to the pre-event publicity, optional. Although quite a number of beauties opted for a bikini at the Rooftop Beer Festival and all seemed to be having a great amount of fun. Dancing a little, relaxing in the pool, trying all the different free drink on offer and playing games.

Early in the evening, table tennis (aka ping pong) was popular along with a couple of “bag tossing” games also along with the ever popular beer pong. For those guests who wanted a little more serious gaming, there were a few tables set aside for Blackjack. There was also food, prepared by the Grand’s resident chefs and a proper bar for those who wanted a break from the beer.

Leaving the subject of food and drink, the entertainment was perfect for the “laid back” air of the event. Two local bands, The Perks and Play For Keeps kept things moving and both all male groups had CD’s, and memorabilia set aside for fans and potential fans to collect for a donation. Sadly, the first group to play had a relatively sober group of listeners and not many felt the urge to dance to The Perks.

Later when Play For Keeps came on stage enough liquid libation had been consumed that the crowd easily let the music bring out their inner dancer. Both groups provided quality entertainment and it would have been brilliant if they could have spent more time on stage. Despite their short performance times, the evening was full of music from both the bands and the DJs.

As the evening moved on, less time was spent on the more physically demanding games, ping pong and the bag tossing game and more was spent on beer pong and floating in the pool. The general feeling of the 2nd annual Rooftop Bikini Beer Festival was one of good-natured fun and all at the festival, male and female, made the most of what felt like a “singles” night without the predatory environment. This event was a splendid way to spend a Saturday night on a long three-day holiday weekend. It is recommended that when the 3rd annual festival shows up next year folks who love music, rooftop pools, dancing, beer, and a great atmosphere should definitely sign up.