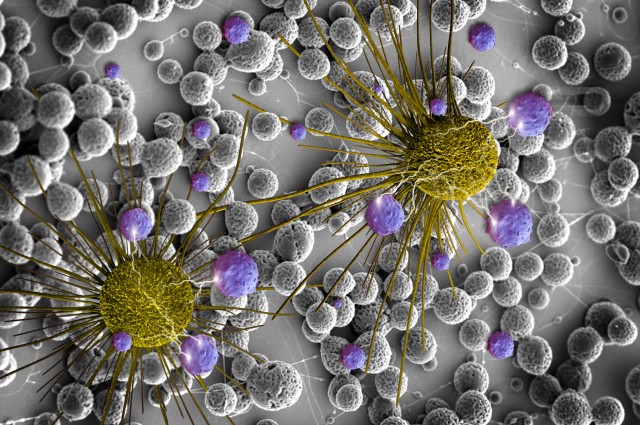 Toxic bacteria that has been discovered in dirt which might produce infections that destroy human flesh in its natural state has been transformed with a small number of genetic tweaks to become a cancer tumor slayer. Scientists located at the Johns Hopkins Kimmel Cancer Center removed the poison manufacturing gene from the bacterium known as Clostridium novyi.

When it is in its natural state, it can be lethal when it is presented into the human bloodstream. The researchers inserted spores of the altered bacteria directly into cancerous tumors of mice, canines and eventually a human being. In each of the three cases the microorganisms sprouted and let loose enzymes that consumed the tumors from the inside out. This resulted in either a substantial decrease in the size of the tumor or total obliteration, without any damage to healthy tissue around the tumors.

Scientists stated that with such impermeable proof, the projection for bacterial injection therapy becoming a treatment used in combination with other anti-cancer drugs has enormously improved. The C. novyi bacterium brought extra special attention because it only flourishes in environments that are depleted of oxygen, making it idyllic for both working and also attacking cells that are starved of oxygen inside a tumor. Importantly, the bacterial spores do not develop in strong, healthy oxygen abundant tissues so their caustic power is easily controlled.

Investigators started their research by embedding aggressive brain tumors in mice and then proceeding to treat them with a shot of C. novyi spores. It only took 48 hours for the spores to kill the the tumor cells while sparing healthy, fit cells only micrometers away. The mice that were given the treatment of spores lived an average of nearly 35 days after the tumor was inserted, compared to barely over 15 days for untreated mice.

The scientists then attempted to try their test treatments on dogs. This is due to the fact that canine tumors are practically genetically identical to the tumors of humans. They tested 16 dogs, who were suffering from naturally happening tumors, with the bacterium spores. Out of the 16 canines, there were six who experienced substantial reductions in the size of the tumors they had. Three other dogs’ had tumors that totally disappeared. After such achievement, the researchers decided it was time to try the spore therapy on a human being.

The first individual who received the spore therapy was a female, age 53, who had been diagnosed with abdominal cancer in 2006. Since that time the cancer had since spread all over her body. Scientists decided to target a tumor located on her shoulder, and they inserted the spores into the tumor.

The treatment was hard for the woman. She experienced stark pain in her shoulder along with a fever as her body fought the bacteria. Ultimately, the tumor created an eruption that needed to be drained of debris and fluid. Two months after the treatment was performed, her shoulder tumor displayed all signs of defeat, without any indication of a lasting infection.

However consequences from her full trial are unfinished at the present time as she is still being supervised. The researchers printed up their findings in the most recent edition of the journal Science Translational Medicine.

The scientists explain that the trail for C. novyi is very obvious in their opinion. They first need to continue testing its efficacy and safety in human beings. They also need to detect other anticancer drugs and therapies which can be given separately, but in combination with the bacteria to improve the results. So far, researchers are stating this is a small, but optimistic victory in the battle against cancer.  The bacterium in its natural state has been transformed with a small number of genetic tweaks to become a cancer tumor slayer.