Beware of the Spider Dog [Video] 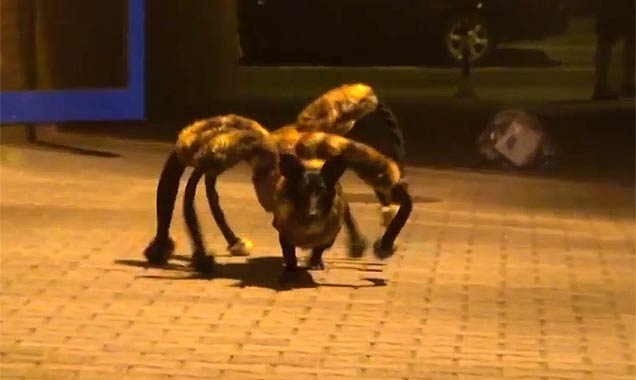 Beware of the Spider Dog! Pedestrians on the streets of Poland are a bit more wary today after the recent exploits of a certain huge Spider Dog went viral on YouTube. The video, entitled Mutant Giant Spider Dog, shows the terrified and startled reactions of people when they encounter Sylwester Wardega’s pooch, Chica, dressed up in the Spider Dog costume his owner designed for him.

In only three days, the video has had more than 44 million views.It has gone viral in a big way, surprising almost everyone.

Sylwester Wardega, of Poland, dressed up his pet pooch as Spider Dog and then filmed the results. Just like in an even creepier version of Candid Camera than the original, he recorded their reactions and even added spooky elements like spiderwebs with people trapped in them and fake human body parts that unsuspecting people came across before having the wits scared out of them by what looked like a nightmarish cross between a dog and a spider with a dozen furry legs.

Gangnam Style remains the video that has the most views at over 2 billion 80 million. Still, it is pretty impressive that a dog dressed like a spider in a video could get over 44 million views in the span of just 72 hours. In the first day, the video already had managed to get three million views and the numbers just kept building up from there.

For her part of the prank, Chica the Spider Dog did not have to do much except act naturally, growling, barking and chasing after unwary people, probably more to lick them than to harm them in any way. While it might seem somewhat mean to scare people just to pull off a practical joke and film the reactions of people, what Wardega did in creating the video is not very different from TV series like Scare Tactics, hosted by Tracy Morgan, or Punk’d (Ashton Kutcher). Even some of the practical jokes on the various incarnations of Candid Camera have verged on being a bit mean, startling the people that the show pranked and making them run away in terror.

In one of the scenes from the Spider Dog video, a man and his girlfriend come across a man dangling in a spiderweb in a park. The young lady’s boyfriend cautiously but bravely approaches, only to be scared when he sees the horrifying sight of Wardega’s Spider Dog approaching — then, he runs from the park in terror.

There are many other such scenes in the video, of people fleeing headlong into giant spiderwebs. Two women in a parking lot run away from the freakish mutant, while a man in a train station sees what appears to be bloody, human body parts hanging from silk threads — could it all be the work of a humongous spider with dog-like attributes, or a dog with spider-like appendages and the ability to spin webs?

The Spider Dog video is not the only scary but hilarious film that Sylwester (SA) Wardega has unleashed upon the YouTube video-verse, though it has been, so far, the most viewed one. Wardega has also made one of a Slender Man sort of person, who hangs out in parks, as well as one of a Spider Man, who sprays “webs” at people strolling by and Dangles upside-down from subway carts, among other antics.

How can a Spider Dog, a pooch dressed up as a spider, provoke such terror in people?

A pooch dressed up like a spider might not sound too fearsome. The spider legs of the costume do not even move independently of each other, by mechanical means. In the daylight, Chica seems to be just as cute and lovable as any other normal dog. So, why does the sight of the dog, when costumed as Spider Dog, provoke such terror in people?

Perhaps it is because Spider Dog comes out at night, when people might already be a little bit jumpy. The pedestrians Spider Dog surprises are not thinking to themselves that, as the creature’s more spidery-looking legs are not moving, it must be some sort of a prank — they just interpret what they are seeing as being a giant mutant creature of some sort.

The onlookers are conditioned to expect something like that, a huge, nightmarish Spider Dog, when they first encounter huge spider webs with people dangling from them, a man lying, apparently dead, in an elevator and other gruesome sights. They are given all sorts of visual cues to make them suspect that there must be an extremely large spider in the area, so when Chica starts chasing after them, usually their reaction is to scream and flee in fright.

If one tiny spider can kill a grown man with just a single bite, who knows what a much larger Spider Dog might be able to do? Most people would rather not wait around to find out.

Why did the SA Wardega video go viral? People enjoy watching others be scared, especially if what they are afraid of is nothing more than, say, a dog that has been dressed up to look like a spider. If a person ever encountered a real spider that was as big as Spider Dog — though, Chica is not the biggest dog in the world — he or she would, likely, run in terror. It is easy to laugh at someone while knowing that his or her life was never really in danger — but just wait. Maybe one day, the Spider Dog will be in America, or Wardega will, creating his latest viral video.